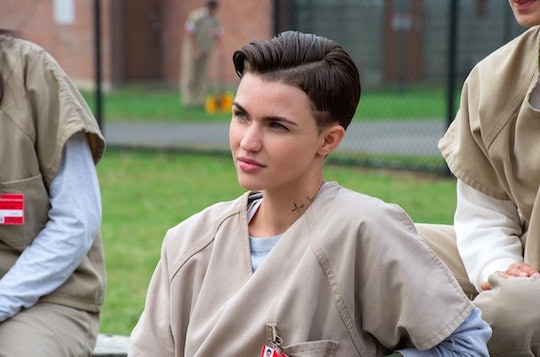 (Warning: This post contains spoilers from Season 4, Episode 6 of Orange Is the New Black.) The last time we saw Stella Carlin (Ruby Rose) on Orange Is the New Black, she was being carted away to Max thanks to all of the paraphernalia her ex-lover Piper stashed in and around her side of her cinder block cell. But despite her character's awful decisions in laundering money from Piper's panty business, fans can't help but ask, "Will Ruby Rose return to Orange Is the New Black?" Even though she royally screwed over Piper (who isn't even an important player anymore, let's be real), Ruby Rose's character was an instant fan favorite last season on Orange Is the New Black and watching her get taken away at the end of the Season 3 finale was tough.

Which is why the quick scene featuring Stella in Season 4, Episode 6 of Orange Is the New Black was so precious. It was just a couple of minutes long, but the scene between Nicky and Stella in Episode 6 let us take away two important things. First, we saw that Stella has not been forgotten and that regardless of her residence at Max, there may be hope that she will be back to Litchfield again. Maybe not today, and probably not tomorrow, but it's still a possibility for someday, right? The odds that Piper will be imprisoned with yet another ex are probably fairly slim, but we've all gotten over those sorts of issues long ago.

The other thing that the scene between Nicky and Stella on Orange Is the New Black proved was that Nicky really was finally doing well. As she says herself, obtaining pretty much any drug is plenty possibly in Maximum Security, but, for the moment, she'd been staying on the straight and narrow. Stella, on the other hand, appeared to be very much in the thick of it, getting passed drugs and fitting it, so to speak, at Max.

Will Ruby Rose return to Orange Is the New Black on a more permanent basis? I think I speak for everyone when I say that no one really cares what happens to Piper at this point, but having Stella back at Litchfield is easily what everyone wants. If only to throw us something new and exciting, rather than the totally sad and depressing episodes that Season 4 of Orange Is the New Black is providing.