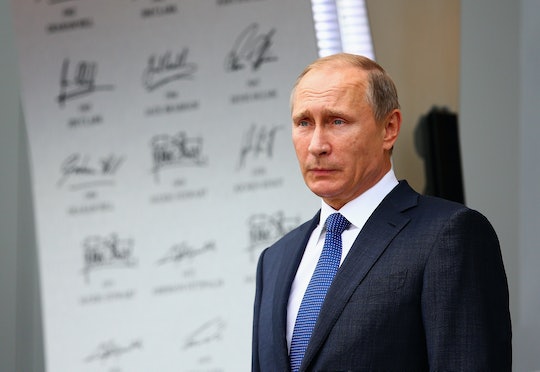 Will Russia Be Banned From The 2016 Olympics For Doping? The U.K. & Australia Say It Should Be

In the wake of a report from the World Anti-Doping agency (WADA) alleging a "deeply rooted culture of cheating at all levels" in Russia's athletic program, the natural question being asked is, will Russia be banned from the 2016 Olympics in Rio de Janeiro? According to CNN, it's a possibility, for track and field athletes at least. The WADA report, released Monday, paints a pretty damning picture of the alleged role performance-enhancing drugs play in Russian athletics. Former WADA president Dick Pound, who conducted the report, said it revealed a"deeply rooted culture of cheating at all levels."

Russian sports minister Vitaly Mutko, who the report accuses of ordering some samples to be manipulated, immediately decried the report, saying the report provided no evidence and that the report is the product of "another commission that – for some reason – decided to pick on Russia." He added, "anything we do, we are still the bad guys."

The WADA report claims that a Moscow laboratory "intentionally and maliciously" detroyed more than 1400 samples even after WADA asked the laboratory to keep them. It further claims that the All-Russia Athletics Federation (ARAF), the Russian anti-doping agency (Rusada), and the Russian Athletics Federation have all failed to comply with international anti-doping procedures. WADA says that samples were often pre-screened at an unaccredited lab on the edge of Moscow, then passed on to a WADA approved lab, and that the head of the accredited lab accepted bribes to conceal positive results. The report also claims that the 2012 Olympic games in London were "in a sense, sabotaged by the admission of athletes who should have not been competing." Russia won 24 gold medals during the London games.

When reporters asked Pound Monday if the report points to the Russian government sanctioning doping, , who created the report, answered, "In the sense of consenting to it, there's no other conclusion."

Australia and the UK have already called for Russia to be banned from the 2016 games. UK Athletics chairman Ed Warner told the BBC that the International Association of Athletics Federations is meeting at the end of the week to discuss sanctioning and maybe suspending Russia from international athletic competition.

2016 Australian Olympic team official Kitty Chiller reportedly told reporters Tuesday, "We would very much support Russian track and field athletes not being allowed to compete in Rio if their federation is not code-compliant to WADA."

That decision would be good news for at least one American Olympian, race walker Jared Tallent, who claims the Russian doping program cost him gold in the 2012 Olympics. Tallent was the silver medalist in the 50 kilometer race walk. Russian Sergey Kirdyapkin won the race. Kirdyapkin reportedly tested positive in doping screenings before and after the London Olympics.

CNN reports that the report's findings have already been released to Interpol, the international crime fighting body.