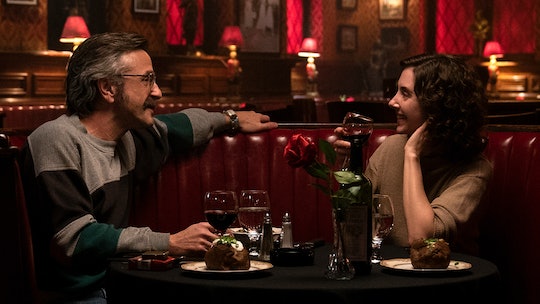 The Gorgeous Ladies of Wresting are headed to Vegas, but don't let the bright lights fool you. Per usual, Season 3 of GLOW will be filled with disastrous drama and road bumps, including a few new developments in Ruth (Alison Brie) and Sam's (Marc Maron) rocky relationship. Ever since the Netflix series made its Season 1 debut, fans have noticed a spark between the director and the woman behind the villainous "Zoya the Destroya," but will Ruth and Sam hook up on GLOW Season 3? Some fans want to see the two chaotic characters together. However, if a romance does blossom, it's probably going to be a slow burn.

Warning: Spoilers for Season 3 of GLOW ahead.

Following two seasons of building sexual tension, Ruth and Sam finally get together in GLOW Season 3. But don't get too excited. Things don't go as well as you might think, and the two don't actually get to hook up. At the start of the third season, Ruth is still maintaining her long-distance relationship with Russell (Victor Quinaz). But after a day at the casino with Sam, the director confesses his love to Ruth, and the actress turns him down by listing out a few concerns, including his use of cocaine, anger, and age. This upsets Sam, and as a result, the two keep their distance.

Of course, there's a strong sense of awkwardness in the air from here on out. Ruth seems to overcompensate in her relationship with Russell, which is shown when he comes to visit. Meanwhile, Sam, who is still feeling hurt, realizes his reign as GLOW's director has come to a close. So he leaves Vegas to help Justine (Britt Baron) with her screenplay in Hollywood. Eventually, after an insightful talk with Debbie (Betty Gilpin), Ruth is able to admit her feelings for Sam. But by then, it's too late. Sam is already gone.

A few months — and one heart attack — later, Ruth returns to California when Sam offers Ruth a chance to audition for Justine's movie. When they reunite at a bar, Ruth tells Sam she loves him, and the two share a kiss. But before they're able to reach Sam's house to hook up, Sam tells Ruth she didn't get a part in the film. Ruth then snaps at Sam for giving her hope, and she leaves in tears.

There you have it. Although Sam and Ruth confessed their love to one another and got together for less than an hour, they are now back to square one, and fans won't know what happens until the show returns. That being said, it's definitely not over between these two if the series comes back for another round, as Ruth's relationship with Sam might be necessary to push Ruth's character forward, according to creator Liz Flahive's interview with The Hollywood Reporter.

"It’s part of Ruth’s journey and also a complication," Flahive explained, citing Ruth's "complicated and unhealthy relationship with men" at the start of the series. "We’re trying to hit her at this point in her life and in this job with all these different things she has to contend with in order to grow, and Sam is a part of that," Flahive said. "He’s a collaborator and somebody she connects with and what that means to her remains to be seen."

While Ruth and Debbie's friendship is at the heart of GLOW, you can't deny the impact Sam has on Ruth. So here's hoping for some sort of resolve in the future, which can only happen if Netflix decides to renew GLOW for a fourth season.