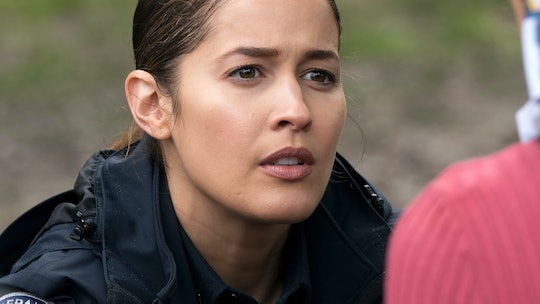 As a fan of Grey's Anatomy, I knew what I was getting into when it came to on-and-off again relationships for its spin-off, Station 19. It's all about the chase and that slow burn that gives fans something to root for. And that's exactly what's happening between Andy Herrera and Ryan Tanner on Station 19 — at least, I think it is. After a number of fiery hookups, the unofficial couple decided to see other people. But following the Mar. 28 episode "Baby Boom," fans are wondering if Ryan and Andy will get back together on Station 19. Get ready because there's plenty of fire to come.

As of now, the fate of Andy and Ryan's relationship on Station 19 has yet to be determined. Viewers watched as the couple continued to spark through a love triangle with Jack Gibson in Season 1 and even a break at the start of Season 2 when Andy pushed Ryan away to avoid the pattern of him always trying to protect her. But, like magnets, these two gravitated back towards each other and continued took hook up. Andy did not want to put a label on their status and they eventually decided on a no attachments, no strings relationship. Now, it looks like someone caught feelings. But this time, it's Andy.

At the end of "Baby Boom" Andy started coming to terms with her feelings for Ryan. When Andy went out for drinks with Victoria, Maya, and Travis, she told Maya, "Maybe things aren't meant to change. Maybe we're meant to have constants and maybe Ryan is meant to be one of mine."

Of course, this confession had incredible timing, as Ryan popped out of nowhere... with a date. "This is Jenna," Ryan said. "Jenna, this is my friend, Andy." Ouch.

Immediately after the awkward introduction, Andy's face said it all. She's not happy — and neither are the fans. After all that buildup, you're seriously going to tell me that Ryan moved on like that, just when Andy figures out she wants to be with him? Unacceptable.

So is there hope for Andy and Ryan? In an interview with Hollywood Life, Jaina Lee Ortiz, who plays Andy, said one thing that might calm your nerves.

So yes, it's very possible that Andy is right. Ryan could be her constant.

Regardless of what does or doesn't happen between Andy and Ryan in the future, this is just the beginning. This is Shondaland, after all.

Following the midseason finale, Station 19 showrunner, Stacy McKee, told TV Guide that there is so much more coming in the second half of Season 2, including more romance.

"We are gonna have some more secret romances," McKee said. "We're gonna have some pretty amazing affairs, some of them perhaps ill-advised. There are gonna be some incredible incidents with such major heroics, I just, I'm bursting because they're gonna be so neat and cool. You know, there'll be some pretty unexpected things too. Who knows? There could be a proposal, there could be, someone might die. You know? We're gonna take big swings. It's gonna be juicy."

Only time will tell if Andy and Ryan will get together on Station 19. But until that moment comes, just come along for the ride. There's plenty of drama to unfold and the journey isn't over just yet.