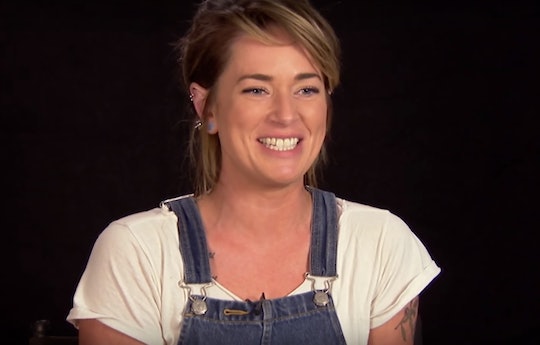 Sam Could Be The First Evicted Houseguest On 'Big Brother'

There’s been just one episode of Big Brother 20 so far and already there are a handful of houseguests to root for, including poor Sam Bledsoe, who will spend the next week as a robot. Since this will likely going to affect her social game before the first eviction ceremony, will Sam be evicted on Big Brother? Obviously she wasn't literally turned into a robot, but as a punishment for coming in last during her group’s first competition, she returned to the house remotely, in the form of a robot which she controls and speaks through from some unknown place.

The kicker is that, depending on commands from the ominous Big Brother voice, she must either go into the Diary Room and come out again in human form, or head in there to return as a robot yet again. With all of the confusion and the chance that these Diary Room visits could interrupt important strategy meetings with other houseguests, her overall game could be ruined within the first week of being in the Big Brother house.

If the other houseguests can't really put a human face with the voice more often than not, then it might be a lot easier to target her when the time comes. Then again, if there are bigger targets being made right now, then Sam could be the safest contestant of them all.

So far, the first official Head of Household competition hasn't begun and there aren't any clear targets, but Sam hasn’t really been able to make a lasting impression with her fellow houseguests either. By losing the first competition, she’s proven herself to be, at least in their eyes, a weak competitor, which could bode well for her, as she may not be perceived as a threat. But on the flipside, if no one is able to make alliances with her or final two declarations, as they often do in these first weeks, then she could be looking at an eviction at the end of this first week.

I also can't help but totally feel for Sam, the Virginia welder who smiled with pride when she showed the Big Brother cameras the camper she lives in on her mother’s property, and who has all of the adorable southern expressions you’d expect. She also said at the beginning of the premiere episode that when it comes to technology, she’s fairly lost, so it makes it even worse that she of all houseguests was given the punishment of becoming a robot and, I assume, controlling said robot from another location.

Even though switching between being a robot and human and back again could affect Sam's social game this first week, I have a feeling that there are already enough feuds forming that she can slip under the radar. When Chris "Swaggy C" Williams won the safety competition and kept another group safe, the other houseguests were understandably frustrated and claim that he put a target on his head. On the other side of the coin, Swaggy C himself was listening in on a discussion in the pantry room and might now be ready to put one of them on the block, if given the chance.

Right now, the name of the game is evicting those who are the biggest threat to specific houseguests' games and Sam hasn’t done anything to ruffle anyone’s feathers. She’s also just trying to figure out how to even navigate the house as a robot. But if nothing else, most of the houseguests seem kind of enamored with RoboSam, so maybe this punishment will end up working in her favor.