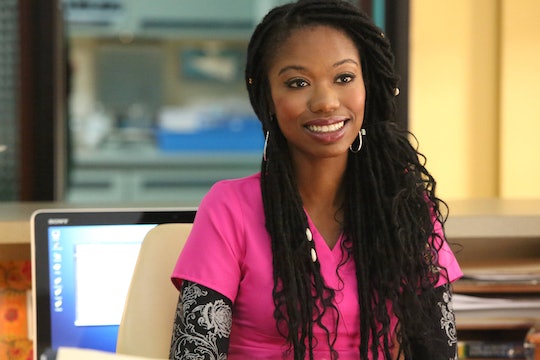 Tamra Makes A Life-Changing Decision On 'The Mindy Project'

As the title only tends to suggest, most of the time The Mindy Project's main focus centers solely around its star: Mindy Lahiri. However, the Season 6 premiere made a point of showcasing another character's storyline in an important and notable plot development. I'm referring to Tamra Webb, who informs Mindy that she wants to have a baby and raise it as a single mom. So will Tamra get pregnant on The Mindy Project? She certainly seems to be heading down that path.

Most of the time, Tamra has served mostly as a side character, only popping up in a couple of scenes for comic relief. So you can imagine how pleased I was (and I'm sure many other fans will agree) to see Tamra's story start to grow in such an unexpected way. I can't directly speak from experience on what it's like to a single mother, but I have plenty of friends who have gone through it and know that it's no easy task to take on. So I'm pleased to see the series address a topic that many other women have gone through. Of course, Mindy herself is also a single mom, so it's not an entirely new concept for the show, though Tamra is actively seeking out this pregnancy. And while she had some initial reservations, she seems ready to experience the joys (and sometimes terrors) of motherhood.

Granted, thus far viewers have only seen Tamra face the initial stages of trying to become pregnant. In fact for the better part of the episode she was unable to give herself any injections even though she's a nurse and has done it hundreds of times to patients. It seems she was struggling with making such a big decision, unsure whether or not she could handle such a huge responsibility. But Morgan (in a rare act of wisdom and comfort) was there to lend an ear and give her the reassurance she needed to hear.

So how long will it take for her to become pregnant? Will she be able to become pregnant? Could this interaction with Morgan lead to them getting back together down the road and even deciding to have a baby together? All of these things are unknown for the time being (though I didn't sense any romantic feelings toward Morgan, so don't hold out your hopes for that). For now all we can do is wait and see where Tamra's journey goes from here. All I know for sure is that I'm extremely invested in it already.