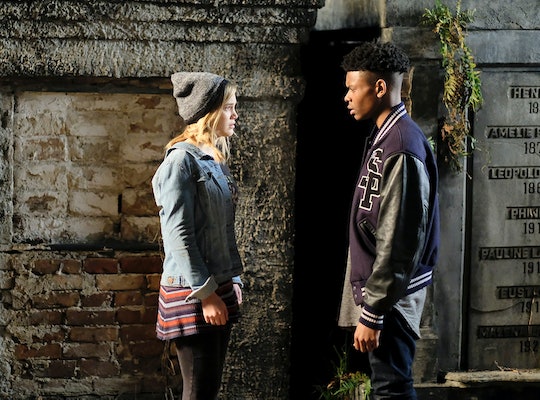 Fans Are Already Rooting For Tandy & Ty On 'Cloak & Dagger'

Regardless of what TV shows you watch, it’s almost inevitable that there will be couples to "ship," or root for. With Freeform’s Cloak & Dagger, plenty of fans have been really into the idea of Tandy and Tyrone ending up together when it’s all said and done. But will Tandy and Ty ever get together on Cloak & Dagger? Or, at least, anytime soon? Fans of the original comic books on which the show is based know that they have a long friendship that spans across several different comics and versions, but in them, they don’t quite make the leap from partners in fighting crime to partners in life.

With the show, however, things could change. I’m not saying that two close-knit characters on any given Freeform show need to be endgame material, but there’s a chemistry between the characters on Cloak & Dagger that you just can't ignore. And Olivia Holt (Tandy) seems to get that too.

I mean, if one of the show’s stars is into their friendship and potential romantic relationship down the line, then it could happen, right?

If fans weren't already hopeful for Ty and Tandy to end up together, then the recent peek into their potential future probably did it for them. In a recent episode, Evita’s aunt said that she was going to look into Ty’s future and right after, they cut to a scene of Duane and his girlfriend, ahem, getting intimate. But if the entire sequence of scenes made you think that it was meant to show Ty and Tandy’s future, executive producer Joe Pokaski told TVLine that that was kind of the point. Which could mean that Ty and Tandy may eventually get together.

"It was the idea that we’re going off of telling a story of the future, and we were excited to tease what will happen in their future and to let the audience hopefully wonder, 'Wait, is that Tandy and Tyrone?' and then adjust accordingly," he said.

Now, that doesn't tell us for sure if Tandy and Ty are destined to be together, but with teasing like that in the first season alone, it’s definitely something.

In the comic books, Ty and Tandy are linked together by their powers and the fact that the darkness in Ty can only be calmed by Tandy’s light. In this way, they seem like the perfect potential couple once they hone their abilities and grow up a little bit more. But since the show only just premiered and Season 1 hasn't quite come to a close, there’s still plenty of time for their relationship to grow and develop.

For some fans, part of the allure of Cloak & Dagger might be the action itself and the origin story of two Marvel characters that are simply partners and nothing more. But the chemistry the pair have on-screen and the fact that their stories are so intertwined definitely makes it seem like there could be something more for them in the future.

Luckily, Freeform already renewed the show for a second season, so with any luck, there could be more romantic development going into Season 2. Until then, all we can do is hope that if that’s the direction the writers take Ty and Tandy, that they do it right and don't rush or prolong things too much.