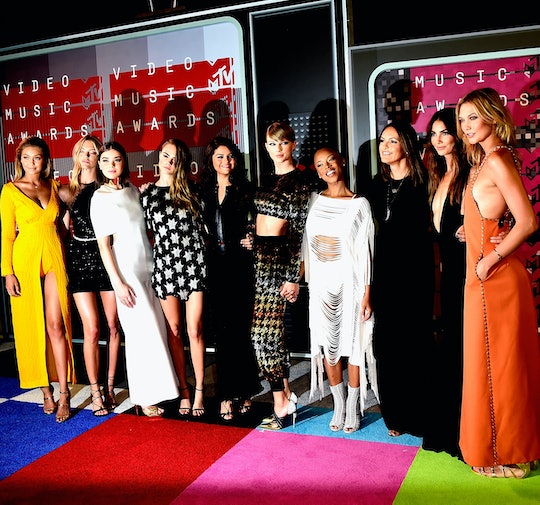 Will Taylor Swift Bring Her Squad To The Grammys? It's Not The First Time The Group Has Arrived On The Red Carpet Together

With the Grammy Awards airing on Feb. 15 and Taylor Swift nominated for record of the year in addition to six other awards, there is a lot of everyone's minds. Will she win? What will she wear? And maybe most importantly, will Swift bring her squad to the Grammys as her date for both the glamorous award show and red carpet walk?

Swift, who introduced the world to some serious #squadgoals in 2015, has made her squad something to envy. Made up of supermodels, actresses, and musicians, Swift has made her squad nearly more famous as herself. After starring in the "Bad Blood" music video together and making several appearances on the 1989 tour, it seemed like Swift and her squad were ready to take over the world in 2015.

But all that girl bonding aside, will TaySwift take the squad with her as her date for the awards? Swift has taken her squad with her before to the MTV Video Music Awards in August, choosing to walk with her group of gal pals rather than her current boyfriend, Calvin Harris. All nine of them — Karlie Kloss, Martha Hunt, Gigi Hadid, Cara Delevigne, Lily Aldridge, Serayah, Selena Gomez, Hailee Steinfeld, and Mariska Hargitay — walked down the red carpet together, arm and arm, looking amazing while doing so.

Swift is up for the Best Music Video award for "Bad Blood" featuring Kendrick Lamar as well as Best Pop Duo/Group Performance for the song. The video, which has over 744 million of views on Youtube was hilariously parodied by Tina Fey and Amy Pohler this past December on Saturday Night Live.

Swift won Video of the Year for the "Bad Blood" music video at the VMAs this past August and brought her famous friends up with her on stage to accept the award. "This was such a collaborative effort," she said, thanking her friends in her acceptance speech. "These women helped create their parts, write their roles, and decide who they wanted to be. Two of these women I've named my cats after. For the fans who have given us this bonding experience we'll have forever — thank you from the bottom of my heart."

However, just because these women starred in the video together doesn't mean that a newbie couldn't also make an appearance in the squad on the red carpet. Swift posted a photo to her Instagram account on Jan. 31, with 5th Harmony member Camilla Cabello and Swift squad regular Serayah, leaving many to speculate if the squad had a new member.

With the popularity of the "Bad Blood" music video and Swift making everyone feel #squadenvy this past year, I feel there must be some sort of squad appearance at the Grammy's coming up in the next two weeks. Otherwise there might be some bad blood with fans.