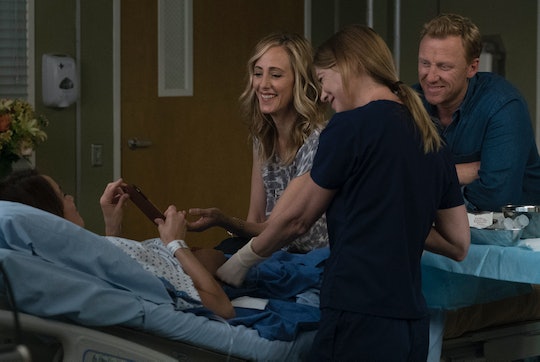 When it comes to Grey's Anatomy, fans are used to people leaving and dying. Loss is just the price we all pay for loving this show too much. It's not often that people actually come back, especially for more than just a few episodes. But since the showrunners are breaking our hearts by taking April and Arizona away from us, they did fans a solid by bringing in Teddy Altman again. And it looks like she's about to stay, given that she's expecting. But will Teddy tell Owen she's pregnant on Grey's Anatomy and will we ever find out if it's definitely his kid? (Though it totally is, right?)

When Grey's announced that Kim Raver would be returning as Teddy Altman for a "guest arc" last year, it was unclear for just how long. It seemed, at first, that she would just be there for the episodes that dealt with Owen's sister, Megan's return. But then in March, Owen ran to Germany to tell Teddy that he was still in love with her. "One Day Like This" was a great episode, but at the very end of their romantic night, Teddy sent Owen packing given that he seemed to be still in love with Amelia.

But Teddy came back to Grey Sloan Memorial to ask for a job in the Season 14 finale, and with a pat of her belly, told a patient that she was pregnant. So how long will it take her to tell Owen?

I guess we're assuming that she conceived during their sex marathon from a few episodes back and that she's coming back to ask for a job in Seattle because she wants to coparent with Owen. Remember, she was really loving her life in Germany when Owen visited and she had a regular chicken joint and everything. If they were going to be together, then, it was going to be in Germany, and on her terms.

Teddy was also pretty adamant about getting all the attention and love that she deserved from Owen, too, so it doesn't seem like she'd return just to get him back. She had her mind made up, likely, until she took a pregnancy test. Teddy's practical and patient — the only reason she's in Seattle is to tell Owen.

But this is Grey's Anatomy, so she probably won't spill the beans until a few episodes into Season 15. That's just how things go in this world. Some fans on Twitter were skeptical about this story line, but it's actually very good if you think about it. All Owen wants in life is to be a dad. He drove Cristina Yang away by trying to talk her out of her decision to not be a mom. Things didn't work out with him and Amelia in part because of her tumor (maybe) and in part because she realized that she didn't actually want to be a mom yet when they had their pregnancy scare.

Owen finally stopped trying to gaslight women into wanting to be a parent and decided to foster a kid on his own this season, which he is currently doing. Amelia is also basically fostering a teen (and getting her sober) at Owen's house. In the finale, Meredith called her sister-in-law out for "playing house" with Owen, which, TBH is exactly what she's doing. She and Owen looked mighty comfy together on that ferryboat during the finale. So if you're shipping Amelia and Owen, Teddy's return is super problematic.

Teddy has loved Owen for years and years and years. And Owen's loved her back, but it's just never been the right time. There was Yang, and then Teddy married Henry Burton to give him health insurance, and now this whole Amelia mess.

If Teddy tells him that she's pregnant with his son, Hunt will likely get all stoic and try to be with her 100 percent, which means dumping Amelia. But Teddy's smart and always stands up for herself, so whether she lets him do that (or wants him to) will definitely be at least a half of a season arc next fall. So while we never know for sure what's going to happen in the Grey's Anatomy universe, it's very likely that she'll tell Owen she's pregnant and then go back to being the interim chief of surgery. How she does it, how Amelia takes it, and what Owen does with the information are the real questions.