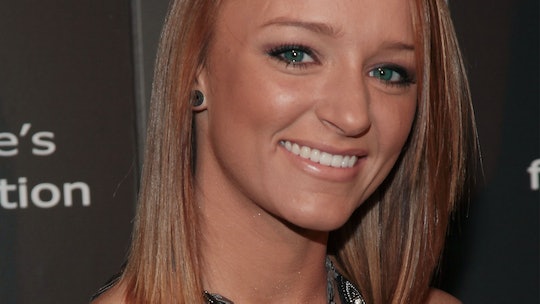 Is it me or does Teen Mom OG become increasingly stressful to watch each year? Season 8 of the MTV reality series has brought more laughs and tears than any other season combined. The show just aired its emotional season finale, and with the reunion special episode just around the corner, fans are wondering if Teen Mom OG will be back for Season 9. There's a lot of drama surrounding Cheyenne Floyd, Maci McKinney, Catelynn Baltierra, and Amber Portwood in real life. And fans will just have to wait and see if it all plays out on camera.

When the highly anticipated finale aired on Aug. 19, Catelynn tweeted her excitement about the season's end. However, her statement sent fans into a whirlwind of worry. "The series finale of #TeenMomOG is about to start on @MTV," she wrote. Immediately, viewers asked the reality star if Teen Mom OG was cancelled after Season 8. Luckily, Catelynn clarified her mistake. "Season 😂😂 oops," she cleared up on Twitter.

Although Catelynn's original tweet was about the eighth season finale, it doesn't exactly confirm or deny the status of the ninth season. And sadly, as of this write-up, MTV has yet to announce Teen Mom OG's renewal or cancellation for Season 9. So fans will have to hold on a little longer to find out what's on the horizon.

Since Season 6, Teen Mom OG has split its seasons into two parts. The first half of the MTV reality series typically airs towards the end of the year. The season then takes a break and comes back early in the following year. This makes each season of Teen Mom OG roughly 30 episodes long. So if Season 8 follows the same schedule, it's likely the show will return for part-two sometime in early 2020. And if the series gets picked up for a ninth season, fans could see the new season premiere in late 2020. Of course, this means everyone will have plenty of time before MTV announces anything in regards to Season 9 of Teen Mom OG.

Regardless of the long wait, viewers can still look forward to the Teen Mom OG Season 8 reunion when it airs on Sept. 2. As always, Dr. Drew will be checking in on the cast. But Amber will not be in attendance, as reported by Us Weekly. The reality star did not make it to the reunion taping in New York City after her arrest for domestic battery on July 5.

"Amber’s trying to get things together in her life and she wasn’t able to attend," a source told the publication. "She’s dealing with the situation and her most important thing is her family."

Nevertheless, the trailer for the eighth season reunion confirmed Amber would be featured in the special, despite her absence. In the preview, Amber is briefly seen and she doesn't say anything. But it's clear she is not on the same stage as the rest of the cast, so it's possible Amber was interviewed separately. However, fans will just have to watch the reunion to find out.

At this point, Season 9 of Teen Mom OG seems like a lifetime away. But the reunion special for Season 8 will hopefully tie fans over until MTV releases any news. Until then, enjoy the ride. It's going to be a long one.