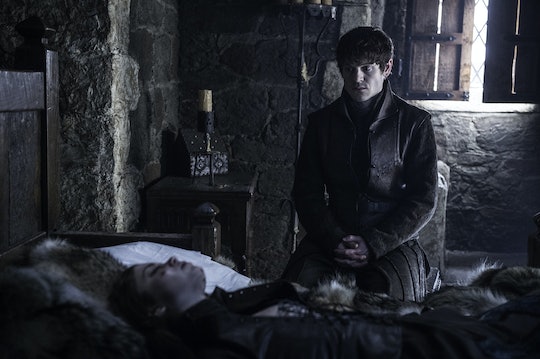 Will The Bastard Bowl Happen On ‘Game Of Thrones’? It's Only A Matter Of Time

The theory of the Bastard Bowl entails Jon Snow and Ramsay Bolton, both bastards of the North, battling it out for control of Winterfell and, essentially, the whole of the North, really. It seems like the most logical step now that Ramsay has lost his beloved bride (note my extreme sarcasm) Sansa Stark, who's made a run for Castle Black and her half-brother, Jon Snow. Ramsay, truly, has nothing left to lose. He's killed his father for the title of Warden of the North and is inching closer and closer to the "Mad Dog" title that Roose warned him about.

On the one hand, fans can all collectively agree that Ramsay Bolton's torture card is just about filled and it's way past his time in Winterfell. On the other hand, though, if the Bastard Bowl happens, that means Ramsay and Jon Snow are going to go head to head, and how does one win in a fight with someone so ruthless and downright scary like Ramsay? No one ever accused Jon Snow of being a wimp, but he's also not a sociopath murderer. So there's that.

There's also the matter of having a battle, period, to culminate Season 6 of Game of Thrones, and while there is plenty going on in King's Landing, the biggest available war to end the season is likely to be the Bastard Bowl. Everything between Ramsay, Sansa, and Jon Snow has led up to this battle, making it a perfect contender to be The Fight Of The Season.

We've also got (spoiler alert — repeat, spoilers ahead, ya'll) the on-set photos of Kit Harrington in Stark garb on what may indeed be a battlefield, and who else should he be battling other than his new arch nemesis Ramsay Bolton? And, as Sansa put it in Sunday's episode of Game of Thrones, they've got Rickon captive in Winterfell. And with Sansa and Jon's reunion taken care of, we've got to get another Stark sibling in there now with the Bastard Bowl.