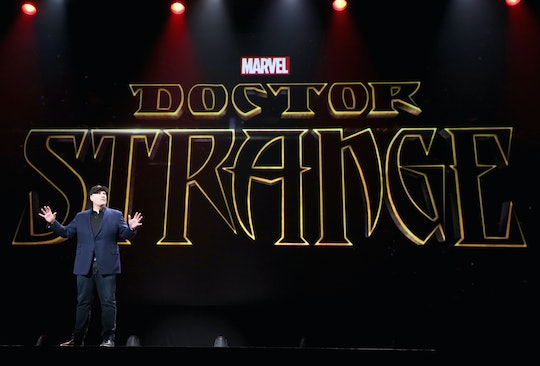 Will The 'Doctor Strange' Movie Be Appropriate For Kids? It Will Be Deep & Complex

Doctor Strange was created by Steve Ditko and Stan Lee (although sources say most of the credit should go to Ditko) way back in 1963 for Marvel Comics. Doctor Strange, aka Stephen Vincent Strange, is a physician who is injured in a car crash that ruins his hands. Needing his hands to continue his work (apparently, Strange as a physician starts out as a bit of a jerk, so I guess he does have that in common with Iron Man's Tony Stark), he travels to Tibet in search of a cure. In Tibet he is introduced to the world of sorcery and mysticism by an Ancient One (played by acting chameleon Tilda Swinton), which eventually leads him to become Sorcerer Supreme and also less of a jerk. Win win!

The movie will also star Rachel McAdams as a fellow surgeon and Mads Mikkelsen as a creepy-looking villain (you might recognize Mikkelsen from Casino Royale, he was the bad guy who wept blood).

Doctor Strange has such a different feel from past Marvel hits like Guardians of the Galaxy, Thor, and The Avengers, to name a few. While those movies boasted bright colors and "good vs. evil" type story lines that work so well for younger audiences, the trailer for the new movie looks trippy, dark, and mysterious, Matrix-y, really. Additionally, it will be rated PG-13, which means "parents strongly cautioned" and some material may be inappropriate for children under the age of 13.

As one of those little "oh yeah!" moments, superfans (plus my brother Dan) will remember that we have heard brief mention of Doctor Strange in the Marvel movie universe before. In Captain America: The Winter Soldier, Stephen Strange is mentioned as one of criminal organization HYDRA's possible threats. (Don't you just love it when your movie worlds are intertwined?).

Ultimately, it looks like Doctor Strange isn't intended for kids, not just because it's violent but also because it might be playing with themes that are simply beyond the grasp of young children: metaphysics, mysticism, sorcery, etc. So check this one out by yourself, if only for the Cumberbatch-ness of it all. Doctor Strange comes out Nov. 4.