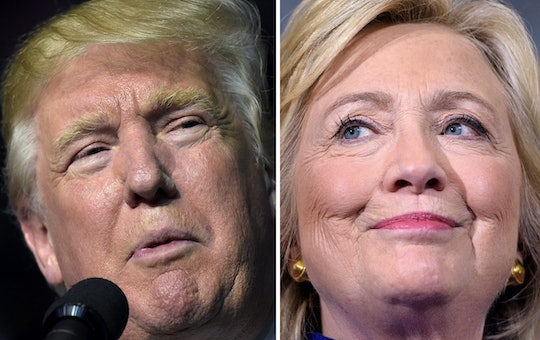 Will The First Presidential Debate Cover Immigration? It's Highly Likely

When NBC Nightly News host Lester Holt — the moderator of the first presidential debate — announced the three topics he planned to cover in the debate, he left plenty to the imagination. Viewers know that Democratic presidential nominee Hillary Clinton and Republican candidate Donald Trump will be discussing "America's direction," "achieving prosperity," and "securing America" on Monday night. Does that last topic, securing America, mean the public can expect to hear more about a wall between the United States and Mexico? Will the first presidential debate cover immigration?

While Holt hasn't clarified what exactly his three topics will entail, it's highly likely that "securing America" will cover immigration — especially since it's already been such a contentious topic during this election season. It's also a topic that Trump and Clinton differ on significantly, and one that brings out strong feelings from both candidates' camps.

Trump, for instance, (now infamously) said illegal Mexicans entering the United States were "bringing drugs, and bringing crime" into the country, and that they were "rapists," back during his initial campaign kick-off speech last June. He then proposed building a border wall between the United States and Mexico. He then said Mexico would pay for that wall, and outlined exactly how on his campaign website (essentially, Trump proposes stopping all money transfers to Mexico from illegal immigrants until Mexico agrees to pay for the wall).

The Republican nominee also believes in deporting all of the United States' undocumented migrants — an estimated 11 million people, according to CNN — and in December, he called for "total and complete shutdown of Muslims entering the United States." Trump told a Phoenix crowd earlier this month:

This election is our last chance to secure the border, stop illegal immigration, and reform our laws to make your life better.

Clinton, on the other hand, believes in finding a legal way for migrants to stay in the United States. "We have to pull together and resolve the outstanding issues around our broken immigration system," she said in May. "The American people support comprehensive immigration reform not just because it’s the right thing to do—and it is—but because they know it strengthens families, strengthens our economy, and strengthens our country."

Clinton called Trump's proposed ban on Muslims entering the country "shameful" and has promised to introduce immigration reform within 100 days of taking office if elected. She wants to protect Obama's executive actions on immigration, which currently protect five million immigrants (who were either brought into the country as children, or have children who are American citizens) from deportation, keeping families together. Clinton would also allow everyone in the United States — whether there legally or not — to have access to health insurance under the Affordable Care Act, and she would support integration by lowering naturalization costs and funding citizenship education.

Clearly, Clinton and Trump have wildly different ideas when it comes to immigration — which means the topic will most likely be brought onto the debate floor, whether by Holt or by one of the candidates. Who wants to take bets on who will bring the subject up first? (My guess is it'll be a cornerstone of Clinton and Trump's opening statements.)