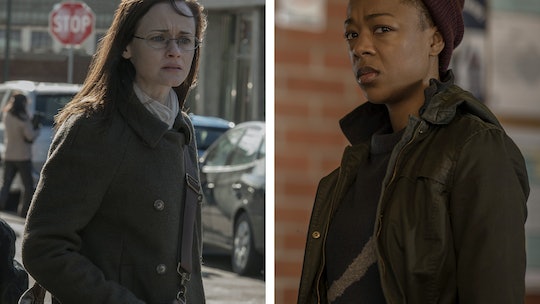 The Handmaid's Tale Season 3 has been one wild ride and no one knows when they're going to get off. While recent episodes have shown June unraveling into someone unrecognizable — re: Ofmatthew — Emily and Moira have been one source of light that fans weren't expecting. And while the Jul. 3 episode, titled "Under His Eye," had some viewers sensing a potential romance between the two former handmaids, there is a fan theory going around that The Handmaid's Tale will send Emily and Moira back to Gilead in an upcoming episode.

In "Under His Eye," Emily came face-to-face with her crimes. Although she unloads a few horrific events in front of Swiss diplomats and Sylvia, it's clear that Emily is still struggling with her past life. However, she is able to turn to Moira, who lived through — and escaped from — the same world. When the pair get together for coffee, they go to a protest against Canadian officials who were negotiating with Gilead over Fred and Serena's demands to bring baby Nichole "home." Both women get passionate, and even Emily — who is typically composed outwardly at least — screamed about all the sacrifice it took to bring Nichole safely to Canada.

While everyone was excited to see the fight brought back to Emily's eyes, the two women were arrested and sent to jail. And now, fans are worried that this incident could potentially get Moira and Emily extradited.

Following the seventh episode, Reddit user leyodahe theorized what Emily and Moira's arrest could mean for their future.

The fan pondered, "Could them getting arrested somehow violate the terms of their asylum, and get them included in the first batch of people extradited back to Gilead?"

Not going to lie, the theory feels plausible. In their recap of the episode, Forbes explained that show has already teased that the Waterfords might use Nichole as a "bargaining chip" for a grander extradition treaty with Canada. It's also possible that the Swiss diplomats who interviewed Emily at the beginning of the episode could be trying to paint Gilead refugees as criminals so they will eventually be brought back.

That said, in the same Reddit thread as the original theory, user Cutiger29, hypothesized that while fans should worry about Emily, Moira isn't in any danger of being extradited.

"Moira is a non-violent offender from what they know. I don’t think they’d do that to her," the fan wrote. "But Emily just admitted to a whole bunch of murder. I can see where she would be extradited."

Nonetheless, not all fans were convinced by the theory. Redditor 5foot2andpullingthru doubted leyodahe's theory because "sending them back would pose risk to their life and I don’t think you can send people back if they’re in danger."

User Alwindelle agreed with the statement. "The right of asylum convention ... states that you should not send someone back if their life is in danger in this country. I wouldn't understand why Canada would do that," the Redditor wrote. "Furthermore, I think that the Canadian public opinion would protest against it, as you've seen in previous episodes."

Although The Handmaid's Tale is a story set in a fictional world, I hope that some real world rules still apply and both Moira and Emily are in no danger of being sent back to Gilead. But, if there's anything I've learned from watching three seasons of this show, it's that no one is safe. So brace yourselves. The final episodes of Season 3 are coming, and I don't think anyone is going down without a fight.