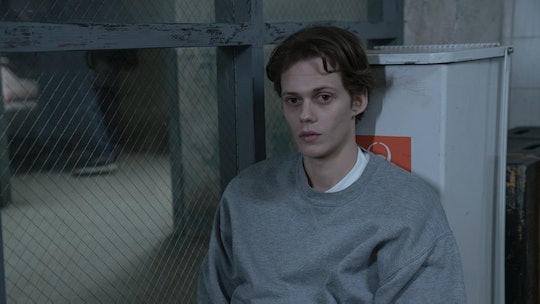 The Kid May Not Be Gone For Good On 'Castle Rock'

Welp, that's it folks. The inaugural season of Hulu's Castle Rock has come to its disturbing close, and I'm not sure if anything has really changed for the Stephen King-inspired town. Season 2 of the series has already been confirmed, but as an anthology series, the story won't pick up where this one left off. That being said, there's always room in an anthology for returning characters. Given his position in the finale, viewers want to know if the Kid will be back for Season 2 of Castle Rock. And the answer, unfortunately, is that no one is saying for sure one way or another.

Warning: Spoilers for the season finale of Castle Rock ahead!

The season finale of Castle Rock brings up even more questions than it ends up answering. Whether the Kid is an innocent victim telling the truth about his alternate universe or something altogether evil is never really answered. In the finale, in order to get where he wants to go, the Kid does influence a murder and mayhem spree across the entire town, and guide Henry into the woods at gunpoint. Molly may believe the Kid's story, but in order to protect the town from his influence, Henry ends up locking him back in the same water tank at the bottom of Shawshank prison where viewers first saw him. The brief moment in which the Kid's true face and age were revealed probably didn't help his case much.

All appears to be more or less well for Henry at the end of the season, but who knows for how long that will last. Though locked (safely?) away, the Kid hasn't actually gone anywhere, so it stands to reason he'd reappear in future seasons. But as far as specifics go, the show's creators, Dustin Thomason and Sam Shaw, aren't saying much. In an interview with Entertainment Weekly, the pair only said that they'd like to revisit familiar characters or stories — without naming names of course. "The pleasure of finding your way back to stories or characters you’ve seen before in unexpected ways is a huge, exciting advantage of this series. I think it’s something that we can do, and allow it to be an anthology but still embrace stories and characters that we love. It just may not happen in the way that one might expect," Shaw said.

One interesting theory that fans have regarding the Kid on Castle Rock is that he is actually another iteration of famous Stephen King villain, Randall Flagg. Flagg is an apparently ageless sorcerer and servant of pure evil — who's primary motivations are to sow chaos and bring down civilizations. He appears in numerous King novels, including The Eyes of the Dragon and The Stand and has the power to influence the behavior of humans and animals. So, sounds pretty familiar. If the Kid does appear in Season 2 of Castle Rock, I, for one, would not be surprised if he turns out to be the evil man in black after all.

There are, of course, other theories about the Kid's true identity floating around, including one where he is Pennywise. Bill Skarsgård, who plays the Kid, also played the evil Pennywise the Clown in the latest iteration of It. So maybe the Kid will reappear in that way.

Then again, it's also possible that Skarsgård's character won't appear again at all. Audiences will just have to wait and see when the show returns sometime next year.