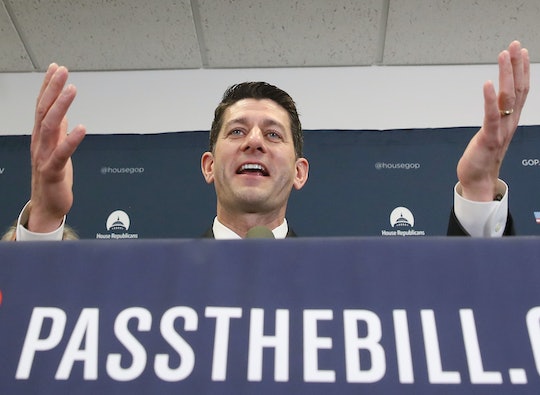 The House is expected to vote on the American Health Care Act this Thursday, following a busy week of whipping up votes. And it's starting to look like there's a very good chance that the new health care bill will actually pass. Earlier this year, the first version of the AHCA didn't make it through to a vote, but after some revisions, there are more on the Republican side who might be willing to vote yes to repeal the Affordable Care Act (or Obamacare, as it's known) and replace it with this new bill.

Republicans need 217 votes to pass the bill, which means that even if 22 Republicans vote "no," they can still get the bill through. They could even find a way to convince some undecided representatives to not show up for work on Thursday and lower that 217 threshold, which sounds like something out of House of Cards, but President Trump, Paul Ryan, and GOP leadership really want to repeal Obamacare, so it's best not to rule any political maneuvers out.

On Wednesday, two high profile holdouts, Michigan Rep. Fred Upton and Missouri Rep. Billy Long met with the president and switched sides from last time. They worked out an amendment that would add $8 billion for states that waive protections for people with pre-existing conditions.

That money was originally going to go into a pool of money for high risk patients, but now it looks like it will be a separate fund entirely, but they haven't released many specifics of the deal yet. But that's beside the point: It was enough for the two representatives to change their minds, and possibly some of their friends, too.

But even if it does pass the House this week, there might be some trouble getting it through the Senate and making it a law. Senate Minority Leader Chuck Schumer has been trying to warn Republicans in the House that it won't be worth voting "yes" on the bill since it will never be passed anyway. He said on Wednesday:

To my moderate Republican colleagues in the House, I ask, "Why would you risk a yes vote for a bill that is devastating to your constituents and has virtually a minuscule chance, virtually no chance of becoming law?"

Schumer might have a point, but when Congress does decide to take this bill to a vote, it will definitely be a close fight.