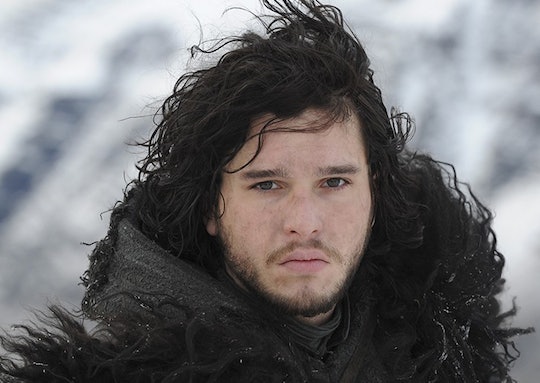 Will The R+L=J Theory Be Explained In 'Game Of Thrones' Season 6? It Seems Imminent

If you're all caught up on Game of Thrones, then you are well-versed in the Game of Thrones theory of R+L=J. And, if you aren't all caught up, then I highly suggest you not continue any further and instead go and continue on whatever season you're currently working on. Fans are bound to wonder if one of the biggest theories in all of Game of Thrones history will be attended to in Season 6. So, will we finally get an explanation to the R+L=J theory?

Essentially, R+L=J is the theory that Jon Snow's birth parents are Lyanna Stark (Ned's sister) and Rhaegar Targaryen (older brother to Daenerys and Viserys), conceived while Rhaegar held Lyanna in the Tower of Joy during Robert's Rebellion. The story goes that Robert (who would become the king we knew only in the the first season) and Ned charged the tower and Ned fled up stairs, where he found Lyanna soaked in blood, begging Ned to make her a promise just before she died.

Then, a few short months later, Ned returns home to Catelyn with a brand new baby boy (our beloved Jon Snow), whom he claims resulted from a sinful tryst with a random woman while he was away at war. Enter the R+L=J theory. According to the popular fan theory that has been all but confirmed by G.R.R. Martin himself, the baby he came home with was Lyanna and Rhaegar's love child, and that Lyanna fell in love with him during the years she was held captive.

And the most important part of R+L=J, if it is indeed true, is that it makes Jon Snow a Targaryen and a rightful male heir to the throne. Which, let's be honest ya'll, shouldn't be inhabited by a bastard Lannister anyway.

But why, you ask, will they finally be revealing the truth behind R+L=J after all of these seasons and after everything that's happened? The short answer is because they can, of course. It's Game of Thrones. They could film an armor-clad horse pooping for 15 minutes and we'd all watch with bated breath. Really, though, now is the best time to reveal this theory to be true.

When Jon Snow took his vows with the Night's Watch he said that his oath "should not end until my death." And guess what, y'all? His death happened, freeing him from the Watch and enabling him to (hopefully) fulfill his destiny at the throne. Or, at the very least, as the Warden of the North, taking over Winterfell from the Boltons. Of course there's the question of how in the world any of this will come out if everyone involved is pretty much dead. And that's a totally valid concern, but as with everything in the Game of Thrones universe, there is a way.

Remember Bran getting cozy with those cool visions a couple of seasons ago? And remember seeing him as a grown teenager in the Season 6 Game of Thrones trailer having another vision of sorts? That's how. That is how we get our "flashback" to Ned and Robert fighting at the tower, and that is how someone in the current time of Game of Thrones will get the initial knowledge of R+L=J.

Sure, nothing is for sure (except maybe Sansa Stark looking pretty tough and fearless in the new trailer), but we can only hope and expect to have R+L=J explained and finally come into play. And then Jon Snow will know much more than "nothing".