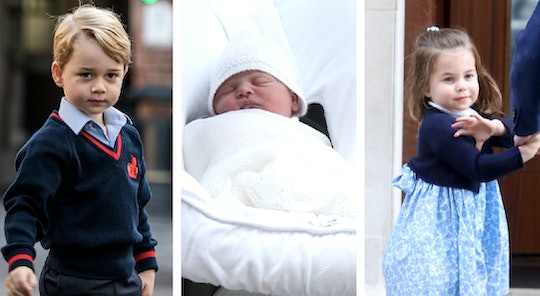 The Royal Baby Will Get Along With This Sibling More Than The Other, An Astrologist Says

Considering the fact that he's under a week old, nobody knows much about the new royal baby yet. His name hasn't been announced, and while he looked adorable in his mother's arms, it's not clear what color eyes or hair he has (maybe he's a redhead like Uncle Harry!). One thing's for sure: His big brother and sister definitely looked super excited to meet their little bro. But will sibling rivalry eventually set in? Perhaps the stars can answer this question. How well George and Charlotte get along with the royal baby based on their zodiac signs?

The new baby was born on Monday April 23 at 11:01 a.m. at St. Mary's Hospital in London, which makes him a Taurus. (Charlotte is also a Taurus; George is a Cancer.) That might not seem like much to go on, but those details (as well as the corresponding facts for the births of George and Charlotte) are all international astrologer and life coach Linda Joyce needs to predict the likely dynamics of their future relationships — as well as the little one's probable personality. Just because he's the baby of the family doesn't mean he'll allow himself to get lost in the shuffle, for example.

"This child is not going to take second place to anyone," Joyce tells Romper, particularly when it comes to George. "He will defiantly take over."

George is no pushover himself, Joyce says, with powerful Scorpio as his rising sign and four planets in stubborn Cancer. Still, his little brother has quite a lot going for him. In fact, the newborn will eventually be "stronger" than George, says Joyce.

"The new prince is very focused, incredibly independent and he will love to be in control," says Joyce, but that's not necessarily a bad thing, she clarifies. "He will want to help, make a difference and have his siblings look up to him," she says.

This could be especially true when it comes to Charlotte. As Joyce says, "the new prince will be totally enamored with his sister."

"They both have Cancer rising and they are both Taurus. There is an immediate comfort zone with that. They understand each other and get along from their first glance."

Because the new baby's moon in Leo is conjunct with Charlotte's Jupiter, according to Joyce, she will be "a supportive and protective older sister" (almost a "surrogate mother") and her little brother will adore all the attention. "They truly love each other," says Joyce.

The new addition to the royal family will certainly take after his camera-friendly siblings in one department: Charisma. The baby has two planets, Mercury and Uranus, in Aries, and his Sun is in Taurus, which is a "very charismatic combination," Joyce says.

"It's someone who wants to be independent before they are ready to be," she adds (so the toddler years should be interesting!). And he won't give up easily, either. A Pluto conjunction in Capricorn means "when he gets something in his bonnet it’s going to stay there," says Joyce. As with most traits, of course, that's a bit of a double-edged sword: Persistence is a valuable quality, while the tendency to hold a grudge is not (especially if that grudge is against, say, your brother George).

Overall, happily, the longterm forecast for this family is positive.

"In short, they will all get along," says Joyce.

"There will be some competition between the boys for first place. But that’s normal. And they will deal with it in a proper and loving way."

Sounds like William and Kate have the heavens in their favor on this one!