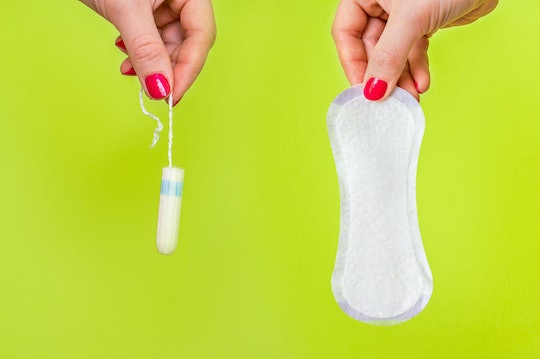 Will The Solar Eclipse Affect My Period? An Expert Weighs In

In case you haven’t heard, on Aug. 21, there will be a total solar eclipse, which means the moon will completely cover the sun for approximately three minutes. In many a yoga class, and in homeopathic and new age literature, a woman’s menstrual cycle is often referred to as, among other things, her “moon cycle.” But how much validity is that term when it comes to periods? And why is it called that? If you’re into those types of things, you may be wondering, will the solar eclipse affect my period — especially since some women claim their cycles are in sync with the moon? Is there any truth to this ancient theory?

During a solar eclipse, the moon moves between the sun and the Earth, casting a shadow as it blocks any light coming from the sun. Kristen Burris, L.Ac, a women’s health acupuncturist and infertility specialist, says in an email interview to Romper, “Although many believe the eclipse foretells doom or danger upon us all, it is wrapped only in mystic beliefs and has no scientific validity on negatively affecting one’s health.”

And this includes your menstrual cycle.

If you’re outside observing the eclipse happen — with special glasses, of course — the eclipse will not affect your period, or even a pregnancy. “Every day our bodies are touched by trillions of neutrinos: fundamental particles that make up our universe with no electrical charge. During a solar eclipse, every few minutes or so, a couple of atoms in your body morph into a different isotope when it absorbs a neutrino. When this happens, as far as we know, it is considered completely harmless to all humans whether alive or in-utero,” Burris says.

So where did “moon cycle” come from and what is the relation between our period cycles and the moon? “In the 18th century, before chemicals, pollution, toxins, processed and genetically modified foods, women menstruated together as one during the new moon,” Burris says. “However, today, we are suspect of the moon’s influence due to the complexity of this historical relationship paired with the drastic environmental, pharmaceutical, and emotional changes in our society today.”

Additionally, Burris has observed cycles of tens of thousands of women, in over nearly two decades of practice, and she says that without a doubt, there is no relationship between when a woman has her period and the moon’s cycle. “However, many patients do report their moods and sleep patterns seem to be impacted by the moon, particularly when it’s full. Women overall seem to be more irritable, moody, and restless sleepers during a full moon,” she says.

So on Aug. 21, feel free to participate in this phenomenal event without worrying about your reproductive organs. All the eclipse can really damage is your retinas if you don’t wear protective glasses when you look at it, so be sure to pick up a pair.

More Like This
How Pregnancy Affects Your Teeth
Banana Boat Sunscreen Has Recalled Products That Were Found To Contain Benzene
10 Ways Breastfeeding Is Good For Moms, Too
9 Reasons Why Some Women Can't Breastfeed