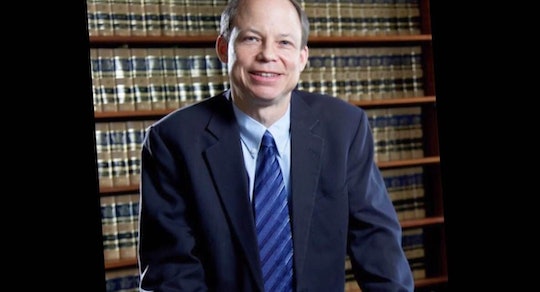 Will The Stanford Rape Case Judge Get Removed? Critics Weren't Happy With His Ruling

Judge Aaron Persky has a history of prosecuting sexual offenders. Before he was elected to become a Santa Clara County Superior Court judge, Persky was a criminal prosecutor. He once wrote in a biography that his job was to focus on "the prosecution of sexually violent predators, working to keep the most dangerous sex offenders in custody in mental hospitals," according to the New York Times. So how did it happen that Persky has come under such intense fire for his ruling in a sexual assault case? Will this Stanford rape case judge be removed, as one widely signed petition has suggested?

The case of Brock Turner, a 20-year-old Stanford student who raped an unconscious woman behind a dumpster near a campus frat party, has called attention to a level of disparity in sentencing in the courts. Persky sentenced Turner to six months in jail for his crime and many legal experts are crying foul. Stanford law professor Michelle Dauber told NBC News that she simply couldn't understand how the judge let Turner off so lightly. She said that the judge "had to bend over backwards" for Turner.

Dauber, a family friend of the victim, has since launched an official site to have the judge recused from the bench. Many feel that the judge's lenient ruling was affected by the fact that he had a similar past to the once-elite athlete. Turner was considered an Olympic hopeful swimmer and Persky, a Stanford graduate, was the captain of the men's lacrosse team when he was at school.

A Change.org petition to to remove Persky from the bench has now reached more than 600,000 signatures and doesn't show any sign of slowing down. But will this petition make any difference?

According to the petition, there are three ways to have a judge removed from the bench.

Judges may be impeached by the assembly and convicted by two-thirds of the senate, according to Change.org. Judges are subject to recall election. The commission on judicial performance investigates complaints of judicial misconduct and incapacity and may privately admonish, suspend, censure, retire, or remove a judge. The commission's decisions are subject to review by the supreme court.

In other words, a petition of this magnitude, with this many people voicing complaints can absolutely make a difference.

And change needs to happen. For a convicted rapist to be sentenced to six months in jail (and possibly serve only three months of that six with good behavior), especially when he has not shown any real remorse for his actions beyond how the consequences have affected him personally, seems ludicrous and patently unfair to the victim whose voice deserves to be heard. With that in mind, here is a portion of the victim's impact statement which she read in court (facing her attacker), according to BuzzFeed. Because the "unconscious woman" matters, and Persky seems to have forgotten about the impact of the crime on her.

One day, I was at work, scrolling through the news on my phone, and came across an article. In it, I read and learned for the first time about how I was found unconscious, with my hair disheveled, long necklace wrapped around my neck, bra pulled out of my dress, dress pulled off over my shoulders and pulled up above my waist, that I was butt naked all the way down to my boots, legs spread apart, and had been penetrated by a foreign object by someone I did not recognize. This was how I learned what happened to me, sitting at my desk reading the news at work. I learned what happened to me the same time everyone else in the world learned what happened to me. That’s when the pine needles in my hair made sense, they didn’t fall from a tree. He had taken off my underwear, his fingers had been inside of me. I don’t even know this person. I still don’t know this person. When I read about me like this, I said, this can’t be me, this can’t be me. I could not digest or accept any of this information. I could not imagine my family having to read about this online. I kept reading. In the next paragraph, I read something that I will never forgive; I read that according to him, I liked it. I liked it. Again, I do not have words for these feelings.

Persky, who was given another six-year term to sit on the bench on Tuesday (he ran for re-election unopposed), feared that a longer sentence would "have a severe impact" on Turner. It should be noted that the Santa Clara Deputy District Attorney, Alaleh Kianerci, was asking for a six-year sentence in the case, which is still considerably lighter than the possible 14-year maximum sentence allowed. Kianerci told the San Jose Mercury that she felt Turner should get at least a year in jail.

"The sad reality is that sexual assault are committed by people you'd never expect, by people who look like Mr. Turner. The fact that he looks a certain way should not give him any leniency."

Persky cannot comment on the case as Brock Turner is planning to file an appeal to his conviction.