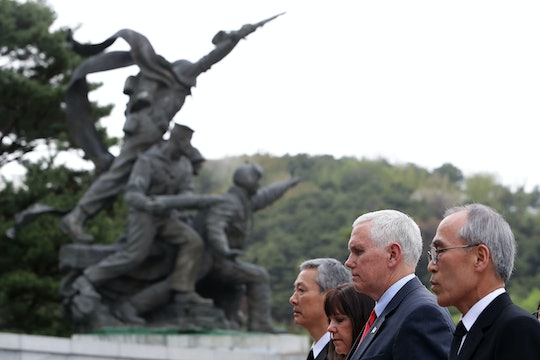 Will The US Bomb North Korea?

Saturday in North Korea saw a failed missile test and military parade celebrating the 105th birthday of founder Kim Il Sung. Two days later, Vice President Mike Pence warned the country that the U.S. "era of strategic patience is over" during an unannounced trip to South Korea. The visit has left many wondering: Will the U.S. bomb North Korea? Though it's not confirmed, Pence's comments in Seoul would indicate there could be strong possibility that President Donald Trump might consider pressing the red button.

During his visit to the capital city on Monday, Pence said that the Trump administration will continue to use "peaceable means" to pressure North Korea into abandoning its nuclear program, according to NPR. But "all options are on the table" for the U.S. in regard to North Korea's nuclear program, he said during a joint news conference with South Korean President Hwang Kyo-Ahn.

More specifically, according to CNN, Pence warned North Korea to not test "the strength and resolve of our new president," pointing to recent airstrikes ordered on Syria and Afghanistan as examples of how far Trump will go. The vice president continued,

We will defeat any attack and we will meet any use of conventional or nuclear weapons with an overwhelming and effective response.

What does this mean? According to CNN, Trump would be willing to use military force to scare North Korea into backing off — a 180-degree turn away from former President Barack Obama's "strategic patience" policy, in which he took a wait-and-see approach. After all, just last week, the U.S. advanced a Navy strike group towards the Korean Peninsula, according to CNN — days before North Korea's failed missile test. But Slate's Joshua Keating believes that the threat of launching an airstrike won't actually work in curtailing North Korea's nuclear ambitions.

Why? Just look at Afghanistan — one of Pence's examples of Trump's "strength and resolve." On Thursday, the U.S. military dropped the 11-ton "mother of all bombs" on a tunnel complex run by ISIS in the country's Nangarhar province. On Saturday, the Guardian reported the strike killed at least 92 ISIS-affiliated militants, according to the Afghan government. But, as Keating wrote for Slate, U.S. troops are still fighting in Afghanistan, even though combat operations formally ended three years ago. In fact, the Council for Foreign Relations reported that the U.S. dropped more than 1,330 bombs on the country in 2016. Last week's airstrike on the ISIS cavern would seem like more of the same, then.

A government as paranoid and insular as North Korea’s is likely to conclude that an attack from the U.S. could now come at any minute, and it had better take measure to raise the cost of such an attack as much as possible.

Keating's opinion is shared by Joel Wit, senior fellow at the U.S.-Korea Institute at the John Hopkins School of Advanced International Studies. Discussing the rising tension between the two countries, Wit explained to NPR that North Korea's threat against the U.S. "has been growing for a while," but has now reached a point "where it's a direct threat." With that, he continued, the U.S. "should not underestimate North Korea's resolve to resist pressure from the United States."

It's a word of caution underscored by Sergey Lavrov, Russia's foreign minister. According to NPR, Lavrov said in response to Pence's comments that, if it can be understood as "a threat to take unilateral action against North Korea, 'then this is a very risky path.'" In other words: Pence may have just poured gasoline on the fire.

If the U.S. were to strike North Korea, that could spell devastating consequences for South Korea and U.S. bases in the region, according to the Guardian. Specifically, as Foreign Policy wrote in 2013, South Korea would see a high number of causalities and capital destroyed. A war with North Korea would also damage the global economy, disrupting the shipping and export industries, and driving up interest and insurance rates, which would devastate commerce everywhere, Foreign Policy reported.

Trump wants to be known as the president "who gets things done." But threatening North Korea isn't a sign of strong leadership. Instead, it's the move of a man playing games with foreign policy without understanding the rules.