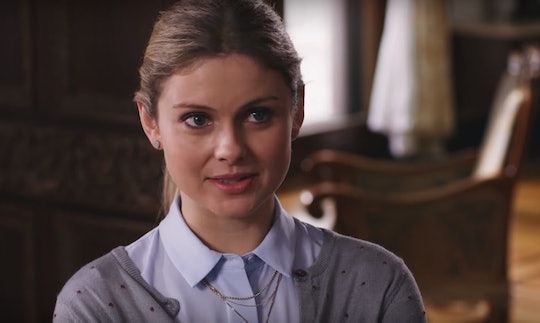 Hoping Netflix's 'A Christmas Prince' Gets A Sequel? You're Not Alone

If The Princess Diaries can get a pretty decent sequel, then why can't the same be said for some other popular royal-centric romatnic comedies? Take Netflix's own A Christmas Prince for example, which has received a lot of buzz from fans ever since it first debuted. So much so that it's let many viewers wanting more — but will A Christmas Prince get a sequel? Fans probably wouldn't say no to the continued love story of the fictional Prince Richard of Aldovia and Amber, the New York City reporter who may just get a royal title of her own once they’re married. Unfortunately, as of right now there’s been no official announcement from Netflix about a sequel, but that doesn't in any way mean it won't happen at some point down the line.

While there haven't been any Netflix Original movies that continued with a second or third part to them, the streaming service is usually pretty generous where new series are concerned. And if Hemlock Grove can get three seasons, then surely Netflix can gift fans with a sequel to A Christmas Prince, at least to welcome the holiday season in 2018. They could even call it A Christmas Princess and follow the wedding and marriage between the newly engaged couple. I mean, I'm not expert on the matter, but I'd assume that any royal engagement would come with its own set of obstacles or any couple to overcome, and I'd very much like to see how Amber and Prince Richard handle it all.

Plus, it's not as if a film needs to debut on the silver screen in order to be given a sequel. Lacey Chabert’s Hallmark romance All of My Heart aired a sequel back in April 2017. It wasn't exactly a Christmas romantic comedy, but it had all of the same elements that make fans so attached to these kinds of TV movies, despite the predictable nature they all seem to share. And you better believe that I'm not the only fan clamoring for this A Christmas Prince sequel.

If A Christmas Prince were to get a sequel, the second installment could come around this time in 2018, or Netflix could even revisit the characters in February around Valentine’s Day. Either way, it's clear the couple will have their work cut out for them if they want to make it work. I mean, he’s royalty and she’s a budding writer living in the United States — that certainly sounds like lots of hurdles for love to overcome, am I right?

For some unexplainable reason, A Christmas Prince makes you wish there was more. Sure, we could easily assume that Prince Richard and Amber live happily ever after, but there are a number of places it could go, should Netflix decide to continue on with their story. I don’t know what it is about these types of movies, but it's downright impossible not to get engulfed in the inevitable romance that blossoms between two seemingly random strangers from completely different backgrounds. And A Christmas Prince has been no exception.

While there’s still no official word from Netflix about whether or not the streaming platform will make a sequel to the newest breakout romantic Christmas comedy of the year, that doesn’t mean you can’t rewatch it in the meantime. 'Tis the season for ugly crying because you’re so happy the would-be unlikely couple on TV had that snowball fight and fell in love shortly thereafter. It's the stuff holiday dreams are made of!