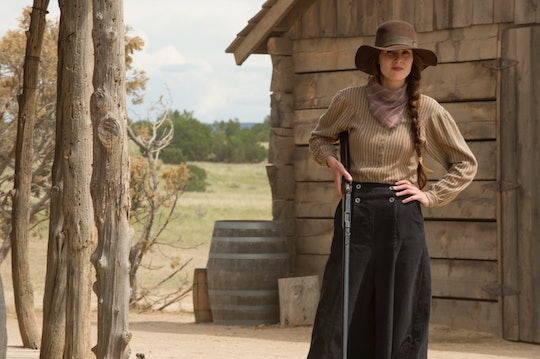 More Of Netflix's 'Godless' Could Be On The Way

In case you hadn’t heard, apparently now is the time to embrace westerns and the kind of lawless excitement they bring to TV shows. That’s probably what Godless creator Scott Frank had in mind when Netflix picked up the show for a Nov. 22 release. And since we all know how fast viewers can power through new shows during a legitimate Netflix and chill session, it won’t be long before fans are asking, will there be a Godless Season 2? According to the trailer for the Netflix Original, it’s meant to be a limited series for the streaming platform.

Frank, who also wrote the 1998 thriller Out of Sight with Steven Soderbergh, not only wrote, but also directed and produced the seven-part limited series. But that doesn't mean it doesn't have the potential to be more than a limited series if the show proves to be popular enough.

When you think of recent western successes in terms of TV shows, the first title that probably comes to mind is HBO’s Westworld, which broke out onto the scene in 2016 and left fans wanting more than the promise of a Season 2 premiere date in 2018. But it sort of opened the door for other western shows to be a thing again, especially if they can bring a fresh perspective to the plot without too much dueling or steampunk thrown in there.

Godless doesn’t seem like it’s about setting the tone for a long, drawn out series, though, since it’s formatted and marketed as a limited series for Netflix. And it also opens the door for the streaming platform to welcome more limited series to its monthly roster. There have certainly been some short-lived series on Netflix, but none that were strictly thought of as a limited series, meant to span a specific amount of episodes and then conclude for good. So Godless being the first of its kind for Netflix might mean similar limited series in the future.

I don’t think we can totally count out a Season 2, though. Take HBO’s Big Little Lies, for example. What started as a limited series in 10 episodes grew such a large fanbase that the rumors are becoming much more steadfast about a Season 2 coming out to continue the story. Although HBO executives have yet to confirm that there will be a Season 2 of Big Little Lies, executive producer and writer David E. Kelley hinted at a return when speaking with TVLine in November.

That being said, never say never for a show like Godless. Because though it may be called a limited series now, if it gets enough traction and love from fans, there could be more episodes in its future.

Judging by the trailer alone, if Godless were to carry on for more seasons, there would probably be more than enough material to make that happen. A town full of tough women and some male outsiders trying to invade? There almost has to be more story to tell than what’s planned for the seven-part limited run.

The new Netflix Original series might seem like a standard Western at first, but it also has so much more going for it than its setting in the fictional New Mexico mining town. La Belle is a small western town run mostly by women (if that name didn't give it away for you) and is seemingly peaceful — that is until a lawless man on the run decides to take shelter by hiding in their town and the men he’s running from come after him. So you know, just old western type stuff.

But judging by all of the shooting, swearing, and general badassery in the trailer for the new Netflix series, it seems like it's going to bring a fresh enough perspective to stand out. Now, it might not be a western in the vein of Westworld, mind you, but the HBO sci-fi series certainly helped pave the way for fans to want some fast-paced and action-filled western content on TV. And with Godless, that seems to be what Netflix will be giving viewers.