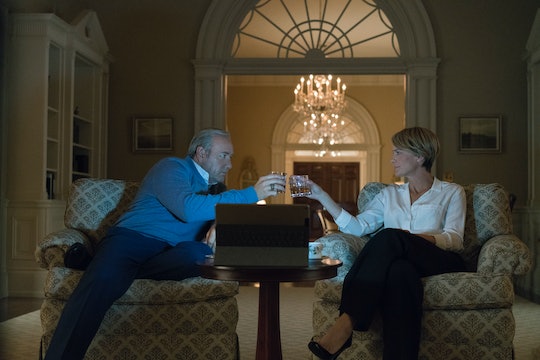 Season 5 of House of Cards may have only just been released on Netflix, but considering this is arguably one of the most binge-worthy shows on the streaming franchise, it's not totally unprecedented to want to know when the Underwoods will be coming back for more — or even if they will be coming back for more. Will there be a House of Cards Season 6 anytime in the near future? Something tells me that Frank and Claire still have a lot more story to tell.

Though the series has yet to get renewed for a sixth season thus far, I'm not all that concerned about it. After all, Season 5 has only just debuted, so Netflix may wait a little bit before serving up the good news. But never fear — because I think both the streaming service and the series have every intention of continuing on with this politically corrupt world we've come to know and fear (and perhaps even start to relate to a little bit). During a recent Kering Women In Motion talk in Cannes, Robin Wright, who plays Claire Underwood, made reference to a sixth season, even going as so far to state that Trump has somewhat rained on the storyline's parade. “He’s [Trump] stolen all of our ideas for season six," Wright remarked to reporters.

That certainly sounds like a sixth installment of House of Cards will be happening in the near future. And considering how the fifth season ends (I won't go into specifics so as not to spoil those who have yet to watch), it definitely leaves the story open for more. In fact, if the series doesn't end up getting renewed (which I highly doubt will be the case) I'd be very disappointed since I'm eager to see where things will go from here.

Plus, now that Trump is officially the president, I'm sure the series is eager to create even more parallels between their power-hungry politician and ours. (Though you can certainly expect to find art imitating real life on more than one occasion throughout Season 5 as well.) But regardless, I wouldn't start worrying about House of Cards' fate just yet. The Underwoods never go down without a fight. I doubt Netflix would be able to remove them from our television screens even if they wanted to. (Though why would they want to?)

House of Cards Season 5 is currently available for streaming on Netflix.