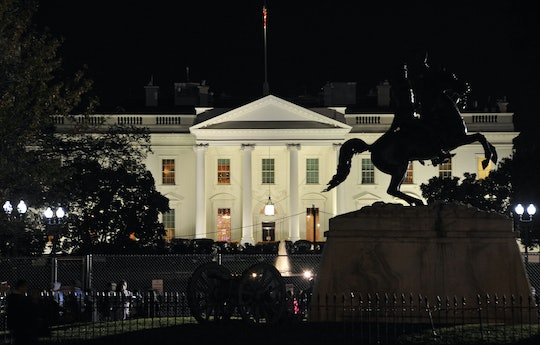 Will There Be A Recount? Election Night Was Unbelievably Close

It has been a very, very, honestly just entirely too long presidential campaign season, and it's now mercifully over. Americans made it through the seemingly endless slog of primaries, the longest summer of head-to-head GOP vs. Dem campaigning, and more genuine "WTF is happening?!" campaign moments than anyone could possibly keep track of. Finally — like sitting through all 19 hours of The Lord of the Rings and The Hobbit trilogies one after another — it's all over. Right? Will there be a recount after Tuesday night's historic voter turnout for a presidential election? Can we finally be done with this madness and move on as a country?

So what does this mean for the American people right now? No matter which candidate you backed this whole time, we, as a nation, can finally breathe a collective sigh of relief: We made it through — just barely, at times, but we made it through. That is of course, if you can even yet breathe from the fact that we somehow, as a country, just made Donald Trump the next President of the Free World. It's important to remember that a peaceful transfer of power is at the foundation of American democracy, and Hillary Clinton's concession is the last "Go high" moment for the country.

Donald Trump's victory speech in New York City showed that yes, he really wasn't kidding when told voters back in October that he'd accept the election results if he won. The mood at Clinton's Election Night rally steadily declined over the course of the night as it became apparent that Trump was going to win. Once the race was called for Trump, audible shouts and crying could be heard.

It was a hard night for Clinton supporters, but just as she has accepted the outcome, so too are her supporters — there's no reason to stoop to the low level of discourse Trump displayed throughout his campaign. I'm pretty sure Thanksgiving dinners around the country are going to be super awkward this year. These results may be hard to accept, but unfortunately, there's just no denying them. Trump is the winner of the 2016 presidential election and every single voter who voted just took part in one of the most historical elections in this nation's history, no matter the result.

While we'll have to see just what Clinton's camp decides to do (we really can't know what is in store), we can look at the history of recounts in presidential elections. For instance, there is the infamous recount of 2000, between former Vice President Al Gore and former President George W. Bush — remember that whole hanging chad hullabaloo? — the margin of victory was simply too small for any major outlet to call the election for one candidate or another. That means that, since it seems people have (for the most part) accepted the results, and outlets are reporting a Trump victory, that we will most likely not see a recount. (Unless Clinton has a Wednesday surprise for us all.)

No matter how a potential recounts proceeds, we're in for several days, if not weeks, of controversy. Let's just hope that Trump's claims of a rigged election — in tandem with these election recounts — haven't completely eroded away the foundation and legitimacy of the U.S. electoral process.