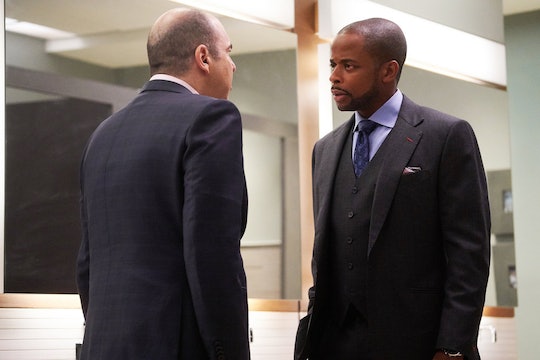 'Suits' Is Wrapping Up Its Most Long-Running Storylines

Meghan Markle moved on from the character of Rachel Zane and Suits a few years ago. Maybe you saw her wedding? But Suits has been going strong ever since the duchess' exit. Season 9 of the show airs June 17 at 9 p.m. ET on USA Network. Nine seasons is impressive, but fans can't seem to get enough so you may already be wondering — will there be a Season 10 of Suits?

I have some potentially bad news. When the show was renewed for Season 9 in January 2019, they also announced that the 10-episode season would be its last. USA Network released a statement from the shows creator Aaron Korsh at that time. "Though I know it isn’t true, it seems like only yesterday USA Network took a chance on an unestablished writer’s very first hour long script," the statement read in part.

After thanking his colleagues, cast, and crew, Korsh went on to thank viewers. "And last but never least, to the fans who have stuck with the Suits family through thick and thin, through can-openers and flashbacks — thank you for always speaking your mind," he said. "Without you, I might start to think I’m getting the hang of this writing thing. And once that happens, nobody wins. I look forward to enraging and hopefully sometimes delighting you with the final episodes." Well, you can't please everybody I guess.

Since Season 9 is almost here, I decided to try and find out more about the rage and delight Korsh expects fans to feel while watching the final episodes. Season 8 ended with Harvey (Gabriel Macht) and Donna (Sarah Rafferty) finally hooking up, but as fans of almost any drama can tell you, that doesn't necessarily mean they'll live happily ever after.

Luckily for everyone, Korsh and Macht were feeling chatty during an interview with Entertainment Weekly, so I can say with confidence that the hookup isn't a one-night stand. “We pick-up that night. The time jump is like hours later," Korsh said. There was a version of the scene that began in the morning, but as is natural in the creative process, writers changed their minds. "Then, we thought, what if put those unspoken things and say them out loud in the first scene [of season 9], which is before the morning. I think it was just to give a little glimpse into what intimacy looks like between them."

A new relationship isn't just fun and games when you work together. Donna and Harvey will be a couple in Season 9, and it will be a chance for the show to explore issues related to the workplace. "Moving into season 9 and being in the office together, [they have to figure out] what is kosher, who finds out when, and how they make decisions now being a couple," Macht said in the EW interview.

But this long-anticipated coupling isn't the only big thing to happen — other characters have important decisions to make in Suits' final season.

You might remember that Robert Zane (Wendell Pierce) has been disbarred. "It really just gives you a new dynamic that we’ve never seen before and breathes life on all levels, comedic and dramatic," Korsh said in the EW interview. A new vibe is so rare in the final season of a show.

So, the end of Suits might be sad to think about, but Season 9 is just beginning. And there is plenty of drama in store.