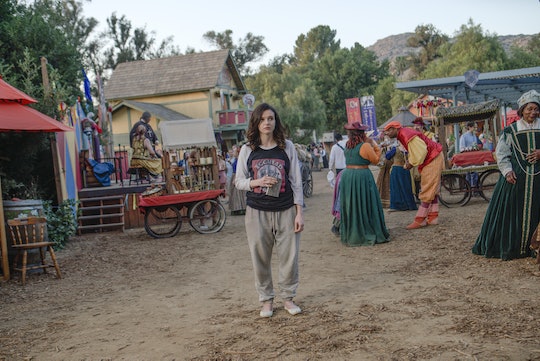 Lifetime has been serving up some of my favorite scripted series since the network started producing original shows. American Princess is no exception. I'd visit the drama, fun and sometimes raunchy antics of the Renaissance Faire any time of the year. So I want to know as much as you do: will there be a Season 2 of American Princess?

As of this writing, there is no word from the network about Season 2 yet. However, the show's cast, as well as its creator, Jamie Denbo, definitely have hope. "I have a lot of ideas for Season 2, but I can’t talk about them because it would spoil the ending of Season 1," Denbo told Collider in an interview. "But yes, there are so many stories to tell. People do literally run away with the circus. Some people make it a part of their lives."

The Ren Faire life is a subculture that is very little explored on TV — which I think is a shame. In an interview for Romper, Denbo says that touch is an important part of the atmosphere. "There's a lot of human contact, there's a lot of connection, there's a lot of touching," she said. "And it's not offensive. It's warm, it's comfortable." The fact that American Princess transports viewers to a place they may never dream existed means the show can explore topics like consent, gender identity parenting, love, family and friendship in new and sometimes fun ways.

No matter how many ideas there are for a show, its success sometimes depends on how invested the cast is in the story and in each other. Luckily for American Princess fans, the cast seems to be having a blast. Actress Seana Kofoed who plays Maggie on the show told Meaww, "the entire cast got along so wonderfully."

She described one shoot day with most of the cast that seemed like summer camp, or, well, a Renaissance Faire. "One bonfire scene we were shooting early on had maybe 12 characters in it, and between takes, we’d keep running back to our massive game of Cards Against Humanity in a tent nearby. I think someone had a guitar. There was definitely singing. The whole night — actually the whole several-month shoot — had a Ren Faire within a Ren Faire vibe to it."

It seems as delightful to make the show as it is to watch it, and Kofoed told Meaww the cast wants Season 2 as much as fans do. "We’re hopeful, of course, as we think it’s a great escape of a show," she said.

Mead makes everyone's life more fun so raise a glass, cross your fingers and shout "Huzzah!" in hopes of another season.