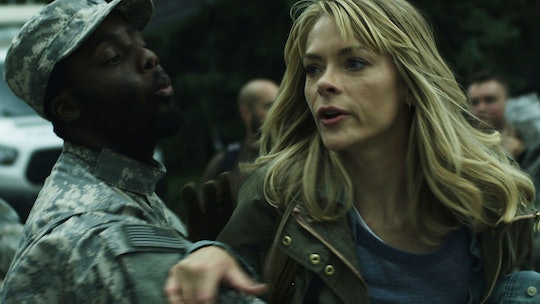 It might be the start of spring, but with the sudden flood of horror television shows and movies, it's beginning to look a lot like Halloween. On Apr. 11, Netflix dropped Black Summer, a prequel series to the beloved Syfy zombie drama, Z Nation. With a few glowing reviews and fans of the flagship series already rallying behind, will there be a Season 2 of Black Summer? Eight episodes isn't enough to quench the thirst for this zombie apocalypse universe.

Sorry to disappoint, but Netflix hasn't confirmed the renewal or cancellation of Black Summer just yet. However, the show just premiered its first season, so fans will simply have to wait and allow the Z Nation spin-off to have a life before the streaming platform decides on its fate for Black Summer Season 2.

Unlike its predecessor, Black Summer begins at the start of the zombie apocalypse, rather than a few years in. According to Netflix, the series follows Rose, a mom played by Jaime King, who was separated from her daughter during the outbreak. In an attempt to find her daughter, Rose joins a group of American refugees to reach a military evacuation site, braving a new zombie-filled world that is filled with brutal decisions and deadly encounters.

Although Black Summer Season 2 has yet to be announced, ComicBook.com reported that the series "already has a multi-season plan in store." When the publication asked King what fans can expect from Season 1 and beyond, she revealed that fans won't know what's coming. King said:

What I can tease is that whatever you think is gonna happen, will not happen. It will always keep you on your toes. That that would keep people alive for, and that would keep people their seemingly downfall, really comes back to like very real human traits. Like, is the person egotistical? Do they have some kind of ulterior motive, right? What is in each character's base psychology? That's what's so cool about it, is that it really becomes metaphorical to what life is like. Every time I read the script, I just never expected to read what I was going to read.

However, whether or not a second season happens and how the writers decide to go about it is still up in the air. King expressed her gratitude for the "elasticity and flexibility" she had on set with co-creator John Hyams and the willingness to change direction when it came to staying to to the story and the characters.

"That's a really fun part about it," King said. "So, the audience will be going on the journey with us. It's literally going to go on the same journey that we went through. And for Season 2... you'll see it when you get to episode eight."

Fans might have to wait a bit longer to find out what happens, but King already has hopes for her character if Black Summer gets picked up for a second season. In an interview with Forbes, King said:

If there's anything I know about a good zombie franchise, it's that they tend to live on forever. And while it is still too early to tell if Black Summer will get a Season 2, there will be plenty of story to explore, especially with King on board.