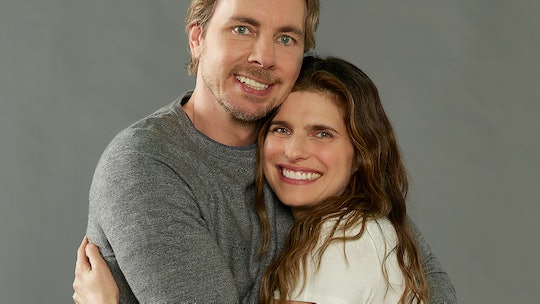 As the daughter of two Taiwanese immigrants, I've always wondered what it was like to move from the bustling city of Taipei to the middle-of-nowhere Missouri. Language barrier and cultural differences aside, I imagine that it was kind of like ABC's latest comedy, Bless This Mess — only a lot less funny. The series premiered on Apr. 16 and follows a newlywed couple who spontaneously decide to move from New York City to rural Nebraska. Thus far, ABC has only aired one episode, but fans are already asking if there will be a Season 2 of Bless This Mess. Although the fish-out-of-water series won over its targeted demographic, there's still plenty of time before the network decides to cancel or renew Bless This Mess for a second season.

As of now, it's difficult to determine if Bless This Mess Season 2 will happen. Deadline reported that the series premiere had a good start in ratings with its 18-49 demographic. The premiere performed better than two of ABC's currently airing comedy series, Black-ish and Splitting Up Together. The publication also shared that the rating for Bless This Mess' debut episode increased 50 percent in comparison to Splitting Up Together's original eight episode run. However, since ABC has only aired one of six episodes, it's too early to predict if a second season will be on its way, much less if Season 1 will even get a full season order.

Hilariously enough, Nebraska's official slogan is, "Honestly it's not for everyone." And clearly, Bless This Mess accepted the challenge and ran with it.

The ABC comedy focuses on newlyweds Rio (Lake Bell) and Mike (Dax Shepard) as they uproot their New York City lives to Nebraska after Mike's aunt leaves them the family farm. Unfortunately, neither one has an inkling as to what it takes to be a farmer. Rio is a therapist who has a deep fear of cows and Mike is a music journalist who thinks that farm life will be a breeze. The couple quickly learns that their new life is not what they expected to be, so they must learn how to navigate through a number of obstacles in an attempt to discover the simple life they envisioned.

The city slicker turned country folk trope isn't exactly new. In an interview with The New York Post, Bell admitted that Bless This Mess was like Green Acres and Money Pit. However, what sets the new ABC comedy apart from the rest is its modern take — a "hipster update" as the publication called it. The series also has appeal for anyone who might want a brief escape from their busy, ever-consuming lives.

"There is a zeitgeist where you are entrenched in your phone, computer, subway systems — things move at a very high RPM," Bell told The New York Post. "That’s why we see articles about families going to buy a plot of dirt in rural America, or Instagram accounts of Brooklynites who start a goat farm in Vermont. There’s something romantic and idealistic about slowing down and being forced to nurture something that feels more real."

We might not know what the future holds for Bless This Mess Season 2, but it certainly looks like Season 1 has more to offer than just a few laughs and a fantastic cast. Whether you're seeking a clean escape from your own reality or you just want to experience a fresh fish-out-of-water comedy, then be sure to stay tuned.