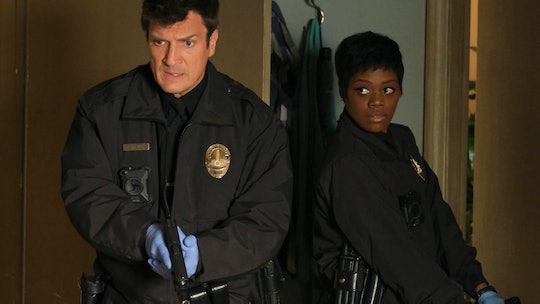 What's In Store For The Future Of 'The Rookie' Season 2?

Following an eight season run on ABC, Castle star Nathan Fillion returned to the network with The Rookie. While some fans instantly fell in love with the crime drama, others stopped watching after the first few episodes. However, with the Season 1 finale just around the corner, fans are getting anxious about the longevity of the show. So will there be a Season 2 of The Rookie? It looks like fans will have to wait just a little bit longer for an official cancellation or renewal announcement.

The Rookie was inspired on a true story. It follows John Nolan (Fillion), a middle-aged man who decides to become an LAPD officer after a life-changing bank robbery. He becomes the oldest rookie on the force, but he's determined to find success in his new career, no matter how dangerous it gets.

In Nov. 2018, the ABC series was picked up for a full season order after airing its first three episodes. This brought up the episode count for the first season of The Rookie by seven, meaning Season 1 would end with 20-episodes total. While the standard is typically 22-24 episodes, Fillion revealed that he is tries not to have expectations when it comes to his shows.

"My experience has taught me 22 is the norm," Fillion told The Hollywood Reporter. "I’ve had shorter, I’ve had longer. I try not to have too many expectations. I hope for the best and plan for the worst."

For now, news about the cancellation or renewal of The Rookie Season 2 have yet to be announced and fans will just have to hold on tight. That being said, most major broadcast networks are still deciding which shows to bring back and end. Per TVLine, ABC has only officially renewed four shows: A Million Little Things, America's Funniest Home Videos, The Good Doctor, and Modern Family. The network hasn't even expressed whether or not they are bringing the medical hit, Grey's Anatomy, which has dominated ABC's ratings in the 2018-19 season.

When you stack the police drama against other shows in ABC's scripted show lineup, the chance for Season 2 of The Rookie could go either way. According to TV Series Finale, the ABC show has had a 0.73 season average in the 18-49 demographic, which is typically an important factor for networks when deciding whether to cancel or renew a show. While ABC still needs to air its freshman finale on Apr. 16, the current ratings for The Rookie put the show somewhere in the middle, still coming in higher than two Shondaland shows, How to Get Away With Murder and For the People.

With the final episode of The Rookie Season 1 fast approaching, fans are just hoping that the season finale doesn't turn into a series finale given that the ratings for the ABC drama have been average at best. So only time will tell if the network will bring The Rookie back for a second season. Let's just hope that the announcement comes soon.

The Rookie airs Tuesdays on ABC.