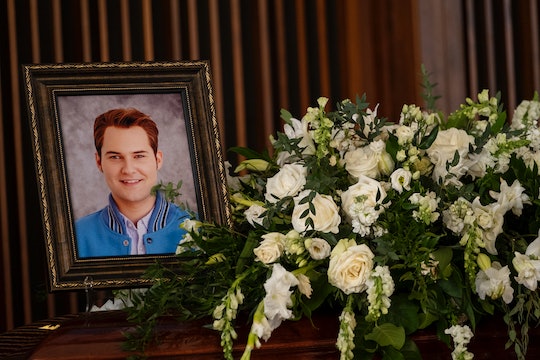 Where Does '13 Reasons Why' Go From Here?

"We've received some extremely sad news from the Evergreen County sheriff," opens the 13 Reasons Why Season 3 trailer. "Bryce Walker was found and has been confirmed dead." The season will focus on finding the person who decided to take justice for all of Bryce's (Justin Prentice) rape victims into their own hands. It's difficult to conceive of the conflict that could come after that. So, will there be a Season 4 of 13 Reasons Why?

Bryce's murder investigation won't be the end of the drama at Liberty High. Netflix announced in early Aug. 2019 that Season 4 of 13 Reasons Why was in production and would be the last season of the show. Fans may already know that Season 2 marked the end of Hannah's story, as Katherine Langford announced in 2018 that she would be leaving the show.

"As a lot of people know, this show was my first role that I ever had," Langford told Entertainment Weekly. "13 Reasons Why will always be a really special part of my life, and I know I’ll always be close to the people that I’ve worked with on this show. But I’m also really excited for what’s to come."

Langford told EW that Hannah's suicide scene on the Season 1 finale was the "hardest scene" for her to shoot. It's been controversial since the series was released because Hannah's death was shown in graphic detail. In July 2019 Netflix announced it had edited the scene to take any potentially triggering imagery out.

“As we prepare to launch season 3 later this summer, we’ve been mindful about the ongoing debate around the show. So on the advice of medical experts, including Dr. Christine Moutier, Chief Medical Officer at the American Foundation for Suicide Prevention, we’ve decided with creator Brian Yorkey and the producers to edit the scene in which Hannah takes her own life from Season 1," the statement read in part.

Yorkey released a statement as well, saying, “It was our hope, in making 13 Reasons Why into a television show, to tell a story that would help young viewers feel seen and heard, and encourage empathy in all who viewed it, much as the bestselling book did before us," per EW. The statement continues, "We believe this edit will help the show do the most good for the most people while mitigating any risk for especially vulnerable young viewers.” The decision comes more than two years after Season 1's release in March 2017.

The show is entering a new phase in Season 3. Hannah's death may be in the past, but it's part of the chain of events that lead to Bryce's murder. Someone needs to be held accountable for their actions and there is no shortage of suspects.

Tyler (Devin Druid) was going to attempt a school shooting at the end of Season 3 before he was stopped by Clay (Dylan Minnette) — maybe he only had one target. Clay may still want revenge on Bryce for Hannah and all of his other victims. Jessica (Alisha Boe) is a victim of Bryce's who may want revenge of her own. Or, the killer could be a new suspect all together. The trailer introduces Ani (Grace Saif), who is friends with Jessica and Clay and already has a criminal past.

Suffice to say fans of the show are safer watching Season 3 and learning who killed Bryce before coming up with potential stories for Season 4. But the end of 13 Reasons Why is coming.

More Like This
'Virgin River' Has Wrapped Filming Season 5 & OMG Is Charmaine Still Pregnant!?
20 Heartwarming Episodes To Help Prepare Your Child For A New Sibling
Rubble From 'PAW Patrol' Is Getting His Own Spinoff Series Full Of "Messy Demolition"
Here’s How To Watch Every 'Modern Family' Thanksgiving Episode