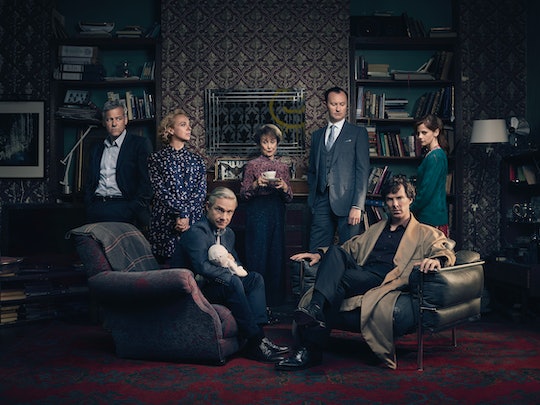 Don't Give Up On 'Sherlock' Season 5

Warning: Season 4 spoilers ahead! Sherlock's fourth season came and went in the blink of an eye, as the three-part installments of the Steven Moffat-helmed miniseries often do, but this season was anything but a slow burn. The very first episode ended with the death of John's wife, Mary Watson, indirectly thanks to Sherlock, and the subsequent fallout of John's newfound widowerhood has been a strain on his relationship with his best friend. But now that they've made up and have just one episode left to catch Moriarty in Season 4, fans may be wondering: will Sherlock return for Season 5? It's been the question of the year.

First, Benedict Cumberbatch seemed to put his foot in his mouth, revealing in an October interview with British GQ that Season 4 ends in a satisfying enough way that it could serve as a series finale. He also acknowledged that it was becoming increasingly difficult to shoot the show, considering those involved are becoming more and more well-known and project-laden. Martin Freeman echoed these sentiments, namely the scheduling obstacle, in a radio interview. But the same day, Steven Moffat backpedaled hard on Cumberbatch's remarks, saying he had been misquoted and that his claims were being exaggerated. He promised that there was no plan in place for Season 4 to be the final season, but considering how hard the actors seem to be struggling with scheduling, Moffat may not have the final say in this particular matter.

For what it's worth, Mark Gatiss, who co-creates the show with Moffat and plays Mycroft Holmes, admitted at a Season 4 preview in London just days before the premiere that nothing is set in stone one way or another. "We would love to do more, but — we are genuinely not lying... — we absolutely don't know," Gatiss told The Hollywood Reporter. "It's up to all kinds of factors, scheduling and willingness to do it." He concluded the statement by admitting that: "We are just not sure." Gatiss also shared that someone had asked him the same question earlier, quipping that "I said I have high hopes for spring, but after the inauguration, I'm not so sure."

So at this point, it seems like no one has ruled anything out yet. The fan base is definitely there, Steven Moffat has an obvious desire to keep the show going, and the actors love their roles — even if they do want to make sure Sherlock goes out on top. It's basically a waiting game completely dependent on everybody's scheduling. Let's hope they're all able to work it out, so we can get back to the sleuthing we oh-so-love.