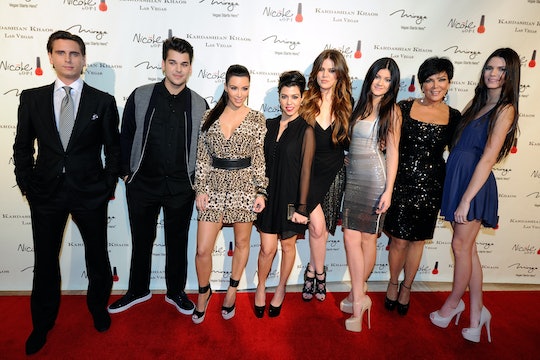 Will There Be Another 2015 Kardashian Christmas Card? Kim, Khloe, & Co Certainly Deserve Their Own

There have been many changes in the Kardashian family in 2015. Not only did this year mark Caitlyn's transition and Kourtney Kardashian and Scott Disick's split, but the family also added a new member when Saint West was born in early December. But one of the biggest changes for the Kardashians? The fact that their Christmas card featured only North West and Mason, Penelope, and Reign Disick. So will there be a second Kardashian Christmas card to follow the grandchildren photo?

Unfortunately, fans shouldn't hold their breath. In fact, fans of the Keeping Up With The Kardashians family should feel lucky that we even got a Christmas card in 2015 at all. After all, not only was there a reported feud brewing between Rob Kardashian and the other family members — stemming from Rob's reported desire to opt out of the Christmas card — but it seems it's quite difficult for the Kardashians to keep up with themselves this year. According to sources via E! Online, the family chose to feature Kim Kardashian, Kanye West, Kourtney Kardashian, and Scott Disick's children purely because it was too hard to get everyone in the same room. As the source said:

This year, especially the last couple months, was so hectic that it was hard to arrange a full family shoot. Showing the kids alone seemed like the perfect thing to do.

And it's certainly true. The last few months not only were Kim's final months of pregnancy — a time during which travel is not all too easy — but Lamar Odom's hospitalization in October sidelined Khloe Kardashian, who has been faithfully visiting her ex regularly during his recovery process. And then, of course, there's the whole Kourtney and Scott break-up, which no doubt complicated things (and would lead to much discussion should a Christmas card arrive without Disick).

Of course, when it comes to the Kardashians, you should never count anything out — the whole family has proved they're game to give more to their fans. But, this year, it seems the Kardashian family is putting their focus where every parent should — on their kids.