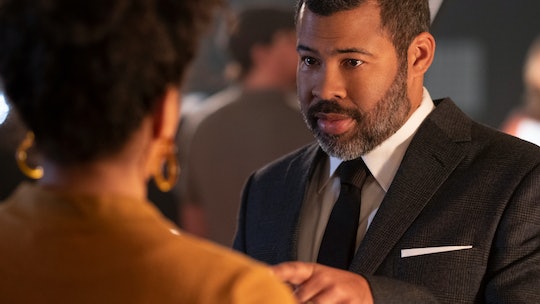 The CBS All Access reboot of The Twilight Zone might have been released on Apr. 1, but the fan response to the anthology series was certainly no joke. According to Variety, the premiere garnered the highest level of unique viewers for a CBS All Access original series, and since then, fans have been singing praises for show hosted by Jordan Peele. Now, with the season finale airing on May 30, everyone is asking if there will be another season of The Twilight Zone. Because the cancellation of the revival would be far more terrifying than anything on the CBS All Access series.

Don't worry, you can calm down now. Given the success of the show's first run, there will be another season of The Twilight Zone. Just four weeks after the reboot's groundbreaking premiere, The Twilight Zone was renewed for Season 2. And yes, there's plenty to be excited about. Executive Vice President of Original Content for CBS All Access, Julie McNamara, announced the renewal in a press release, per Deadline.

Jordan Peele and Simon Kinberg’s reimagining of The Twilight Zone is off to an amazing start on CBS All Access, driving the most viewers on its premiere day for an original series to date. Jordan, Simon, the creative team and cast have done a phenomenal job translating the series’ legacy of socially conscious storytelling for modern-day audiences. They are master storytellers, and we look forward to bringing fans further into The Twilight Zone with a second season.

The Twilight Zone's 2019 revival had quite the start. Praised for its excellent storytelling and creatively modern take on the original series from the 1950s, the show's second season doesn't exactly come as much of a surprise.

The show's success may have a little something to do with the powerhouses behind each episode. Peele, Kinberg, Rick Berg, Audrey Chon, Glen Morgan, Carol Serling, and Win Rosenfeld all served as executive producers on the anthology series. The Twilight Zone revival also featured a phenomenal lineup of guest actors, including Seth Rogan, John Cho, Tracy Morgan, Adam Scott, Sanaa Lathan, Ginnifer Goodwin, and Taissa Farmiga, among many others.

That said, a few Twilight Zone enthusiasts have noted that the reboot isn't quite as strong as the original. For example, Peele's version is in color, while the 1950s classic was in black and white.

“We did consider doing the whole series black-and-white, because we were so obsessed with the original show,” Kinberg told Vulture prior to the show's release. “But we decided we wanted to do something to honor the essence and sensibility and style of the original without going so overboard that we were doing a karaoke version of the original. The black-and-white felt like it was a step too far. It wasn’t honoring it, but a carbon copy of it.”

However, CBS has had a change of heart since the reboot premiered. In early May, The Verge reported that a black and white version of The Twilight Zone reboot will become available to watch on CBS All Access starting May 30.

But why the change? When Peele announced the news on his Twitter account, he simply wrote, "'Cause... come on."

Unfortunately, The Twilight Zone Season 2 premiere date has yet to be determined. But at least you can relive Peele and Kinberg's vision of the 1950s classic anytime you want. And now, you can watch it how it was destined to be seen — in black and white.

Season 1 of The Twilight Zone is now streaming on CBS All Access.