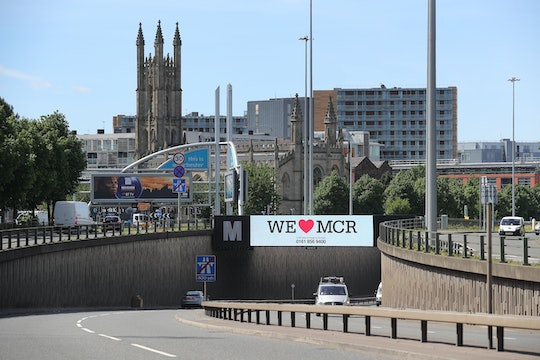 In the aftermath of the bombing at the Manchester Arena on Monday, the citizens of Great Britain are coming to terms with the devastation. Nearly 60 people were injured and 22 died in the attack at an Ariana Grande concert by a 22-year-old suicide bomber. The extremist group ISIS has since claimed responsibility for the attack, and now the question remains... what happens next? Prime Minister Theresa May announced that the country's threat level has since been raised to "critical," and many are worried about the possibility of another terrorist attack in Great Britain.

According to The Associated Press, May announced that her immediate concern was that the suicide bomber (who was born and raised in England) may not have been working alone and could, in fact, be part of a wider network. The "critical" threat level indicates that a possible second attack could be imminent, and was raised from its previous level of "severe." May also reportedly noted that the critical threat level meant that troops would be deployed for the time being at large events, rather than law enforcement officials. This move is part of a larger plan known as "Operation Temperer," which May announced is now in force.

Operation Temperer could see up to 5,000 troops patrolling the streets in place of armed police officers in the coming days. This is the first time Great Britain has seen the threat level raised to "critical" since 2007. The Joint Terrorism Analysis Center, an independent organization established in 2003, is responsible for making decisions regarding threat levels in Great Britain.

May spoke to the press outside Downing Street, the Prime Minister's residence in London, about the likelihood of a future terrorist attack in Great Britain:

... Not only [does] an attack [remain] highly likely, but ... a further attack may be imminent. The work undertaken today has revealed that it is a possibility we cannot ignore that there is a wider group of individuals linked to this attack.

This is the first time that Operation Temperer, which was set up after the Cherlie Hedbo attack in Paris in 2015, has been initiated. May also spoke of the senseless bombing at the Manchester Arena on Monday night, and announced that "terrorism will not win" in Great Britain:

I want to re-iterate what I said this morning about the professionalism of the emergency services and the bravery of the people in Manchester. Through their actions, they proved that cowardice will always be defeated by bravery, that evil can be overcome by good and that our values, the liberal, pluralistic values of Britain, will always prevail over the hateful ideology of the terrorists. The spirit of Manchester and the spirit of Britain is far mightier than the sick plots of depraved terrorists. That is why the terrorists will never win and we will prevail.

Hopefully, the critical threat level will be downgraded soon and without event.