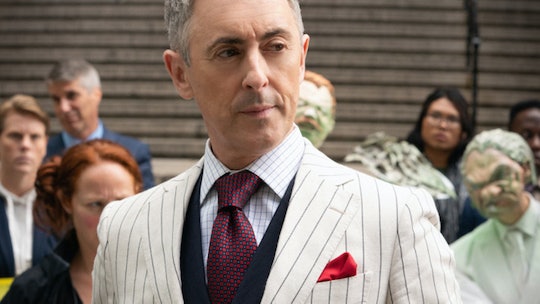 The network's decision not to renew Instinct was revealed by series creator and executive producer Michael Rauch. "I’m very sad to relay the news that @instinctcbs won’t be renewed for a 3rd season," Rauch tweeted, also revealing the second and final season would only be eleven episodes long.

Rauch then took the time to thank the Instinct's cast and crew. "Endless thanks to @Alancumming & @bojnovak for making Dylan & Lizzie more everything than I could have ever hoped," he wrote. "And thanks to our incredible crew, cast, writers, producers & all who helped make our show, with respect, talent & kindness. And a giant thank you to our diehard fans for your love, loyalty & excellent taste (is it too soon to ask for a reboot?)."

Of course, most viewers were saddened by the news of Instinct's cancellation. "This is unacceptable!!! @instinctcbs is an amazing show filled with realistic people," one viewer wrote on Twitter. "People I could relate to. I am really going to miss this show."

Many others expressed their gratitude towards the CBS drama. "Many thanks to all for an intelligent, entertaining and stylish way to spend a Sunday evening," a fan wrote.

And these notions didn't go by unmissed. On Aug. 22, Rauch recognized the love fans had for the show. "Just when social media feels like nothing but a toxic cesspool full of the uncurious & fear-based inhumanity, @instinctcbs gets canceled & the outpouring of kindness from strangers reminds me of the original promise of sm & human connection," Rauch wrote. "(FYI-Not endorsing canceling shows!)"

Novakovic also had a few things to say about the show's cancellation. And let's be honest, she just said what everyone was already thinking.

"WELL THIS SUCKS BALLS," Novakovic wrote on Twitter. "But when one door closes another... actually f*ck that. This sucks balls. Love to all our fans and the most incredible cast and crew. Thank you all for an incredible two years."

So the word is out. @instinctcbs will not be returning for a third season. Almost exactly three years ago I was sent a galley copy of a book by @jamespattersonbooks and @howardroughan and then I met the show runner @mbr34 who was to adapt it for TV and I jumped in. And I’m still in, for two more episodes tomorrow and the last one ever next Sunday. And while I’m sorry I won’t be getting to play with @bojnovak and the rest of the amazing cast and crew again, I’m grateful for two seasons of fun and gore and feeling like a dandy thanks to @danlawsonstyle’s costumes, and selfies with corpses and vegan options at catering and Lala’s occasional guest appearances in the police station when she got bored in her basket beneath my desk. I’m also proud to have played the first ever leading character in a US network drama who is gay. Yes, really. Because of @instinctcbs millions of people will have seen a same sex marriage portrayed for the first time and I hope we changed and opened some minds in the process.

Clearly, every response to NBC's cancellation of Instinct before Season 3 — from the fans to the cast and crew — is a testament to how beloved the show is. And while the end of the show is a serious blow to the fandom, I hope the mystery drama gets a killer series finale.