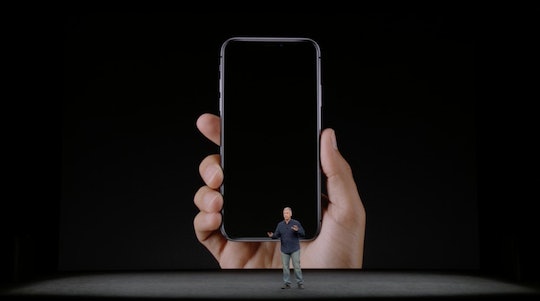 What The Heck Happened To The iPhone 9?!

On Tuesday, Apple announced the upcoming release of the iPhone 8, the iPhone 8 Plus, and the steeply priced iPhone X. The sudden jump from numbers to letters in the iPhone naming system has had some people wondering, however: will there be an iPhone 9, or are we only looking at iPhones X, Y, and Z from here on out?

Romper reached out to Apple for comment, but did not hear back immediately. Apple has yet to publicly comment on their decision to skip straight past iPhone 9 to iPhone X, but considering that Apple pronounces the "X" as "10," it seems like the company might simply be skipping the iPhone 9 altogether. After all, in a press release, Apple chief design officer Jony Ive did say that the "iPhone X marks a new era for iPhone." That could mean that the iPhone X marks the start of a brand new string of names for these super-charged iPhones, as well.

However, the change in naming convention could also have something to do with the iPhone X's dramatic difference from past iPhones — namely, its $999 price tag, which is a significant leap up from the iPhone 8's price of $699. Giving it an entirely new name would differentiate the exclusive smartphone from past iPhones and allow it to be seen as a luxury that deserves a (nearly) four-digit price tag.

There are several significant differences that set the iPhone X apart other than its higher price, of course. The iPhone X has facial recognition that allows users to unlock their phones, make purchases, and animate emoji (an evolution that is actually being referred to as "animoji" by Apple). The iPhone X also features an OLED screen that takes up the entire front face of the smartphone (rest in peace, home button), making its screen as wide and tall as the iPhone X itself.

On top of that, the latest iPhone also comes with 12-megapixel dual cameras, with optical image stabilization in both lenses and a "Portrait Mode" that will let users take studio-quality selfies (say goodbye to paying for headshots). And even with these tech-heavy upgrades, users can expect their iPhones to last longer between charges: Apple claims that the iPhone X's battery can last up to two hours longer than the iPhone 7's does.

This year marks the tenth anniversary of the iPhone, so naming a phone — especially such an advanced one — the iPhone X (rather than the iPhone 9) could simply be a way for Apple to celebrate the anniversary. Or, as some Twitter users joked, Apple could be poking fun at Microsoft's decision to skip straight from Windows 8 to Windows 10.

When Microsoft decided to skip the number nine (which some people are now convinced must be a reviled number in the tech world), the company chose to do so because it planned to switch the way it updated Windows, according to ZDNet. "Microsoft went instead with Windows 10 because they wanted to signify that the coming Windows release would be the last 'major' Windows update," technology writer Mary Jo Foley wrote for ZDNet in 2014.

Judging by the words some Apple leaders are using for the iPhone X, maybe Apple is looking to make the same kind of sharp distinction for its new iPhone. "iPhone X is the future of the smartphone," Phillip Schiller, Apple’s senior vice president of Worldwide Marketing, said in a press release on Tuesday. "It is the beginning of the next ten years for iPhone."