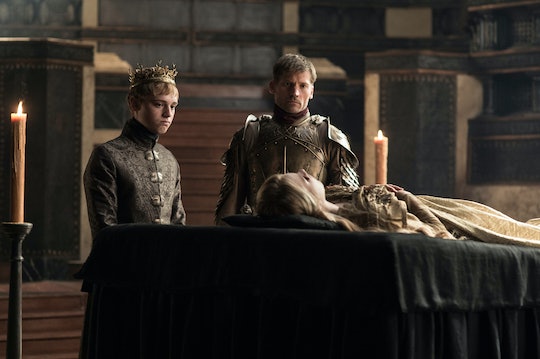 Will Tommen Die On 'Game Of Thrones'? Cersei's Prophecy Is Coming True

At the start of Season 5 of Game of Thrones we were given our first flashback. A young Cersei visited Maggy the Frog, a witch, and asked about the future. Maggy allowed Cersei to ask her three questions, although depending on how you look at it Cersei only really asked two. Maggy told Cersei she would marry the king and that the king would have 20 children and Cersei would have three — she also alluded to the fact that all three would die. So, will Tommen die on Game of Thrones?

Maggy went on to say, "Gold shall be their crowns and gold their shrouds." The shroud is a piece of cloth used to cover a dead person for their burial. Therefore, the prophecy suggests that all three of Cersei's children will die. So far in the show it seems the prophecy is coming true. Joffery (finally) died in the second episode of Season 4, and Myrcella was killed at the end of Season 5, with a kiss from Ellaria Sand. Tommen is the last of Cersei's (and Jamie Lannister's) children but with Cersei's prophecy hanging in the air Tommen's odds of surviving this season seems slim. Sorry, Tommen, but the prophecy has spoken.

As king and the last surviving "Baratheon" (where is Gendry?!) there's a whole slew of people that would like to see Tommen dead. Now that Ellaria Sand has seemingly taken over Dorne, she'll probably be making her way to King's Landing to reign terror to all those she blames for Oberyn Martell's death. Then there's the High Sparrow and the Faith Militant, who Cersei inadvertently gave power to last season. Now that it's clear the High Sparrow could care less about Cersei, the Lannisters, or any of the nobles in general, if the High Sparrow deems Tommen a sinner as well, he could be next on the High Sparrow's hit list.

Plus, in all honesty, Tommen is not really equipped to be king. He's a better king than his brother but only because Tommen is sweet and easily manipulated by both his mother and his wife, Margaery. Tommen isn't really king, he's just a figure head. But if he does decide to really step into his king role and lead a battle or something of the sort he'll be very unprepared.

Tommen doesn't have the political savvy or military experience to survive in King's Landing and it won't be surprising if he's killed before this season of Game of Thrones ends.