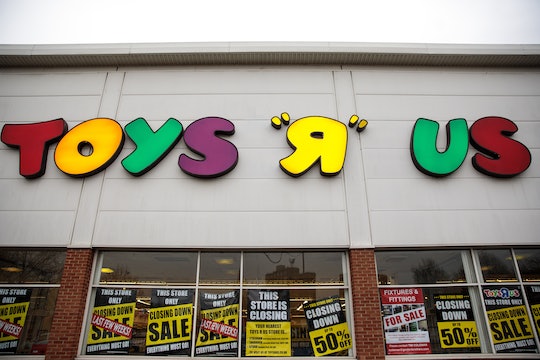 Will Toys "R" Us Still Be Online?

After every doctor’s appointment, even if it was just to look around, I’d get to go into the Toys “R” Us that was on the way home from the office. If I got a shot, I usually was able to get a toy. (Worth it.) I remember sucking on the Dum-Dum sucker the nurse would give me for “being brave” while walking around the most amazing store in the entire universe. And now that most amazing store in the universe — in addition to the Babies “R” Us stores — is closing and liquidating. But even though the brick and mortar stores are closing, what about their online presence? Will Toys “R” Us still be online? Granted, you won’t be able to hear that awesome birthday song over the loudspeaker when it’s announced there’s a birthday girl or boy in the store, but at least it would still be “there.” Man, even just writing that makes me weepy, and I don’t think it’s pregnancy hormones.

As far as information about either of the stores still being available online, Romper has learned that the online store and registry will stay open for a few weeks, but we were not able to confirm a closing date for either. Additionally, a USA Today article reported that CEO Dave Brandon said that he hopes to keep Babies “R” Us registries and web stores available “for the time being,” in case some buyers would be interested in buying assets. Fingers crossed?

However, I had a mini panic attack (at seven months pregnant) in a basically empty Babies “R” Us a couple of weeks ago when my husband and I went to try to “snag some deals” on a few big-ticket items on our registry like the crib, bassinet and swing, which we still don’t have. And I think it’s worth noting that when we looked online, nothing in our registry was really available online either, much less being able to ship items to a store or to your house. Many items on our registry have been “discontinued” or “out of stock.” And even our crib — which was no longer available on Amazon either for some reason — would have to be shipped to our house as there is no longer in-store pick up, and it would take three weeks to get here. And that’s hoping they’d even be able to follow through with the order if they’re going under as fast as it seems. So if it’s that bad for Babies “R” Us stuff, I would imagine it’s the same for Toys “R” Us as well.

Also, if you have a gift card for either Babies “R” Us, or Toys “R” Us, I suggest you use them as soon as possible, because USA Today also reported that the company will be honoring gift cards for the next 30 days. However, “It was unclear if Babies "R" Us gift cards could be used for online shopping.” As far as Toys “R” Us gift cards being used online, no one's sure about that either.

Why is this happening now? A New York Times article reported that a lot of it has to do with competition from online retailers. In fact, the NYT said this is “a textbook example of disruption by internet retailers.”

Maybe I’m old school, but there’s something about going into a brick and mortar shop for some things, like clothes, books, music — and especially toys. I know there’s the convenience of being able to shop in your underwear and have things shipped. I love that, too. But I’m really sad that stores like Toys “R” Us, which were staples to ‘80s kids and ‘90s kids, were so negatively affected by online shopping. Especially since it’s unclear just how long their own online options will be available. I don’t know about you, but I’ll always be a Toys “R” Us kid.

Editor's note: This article has been updated from its original version.