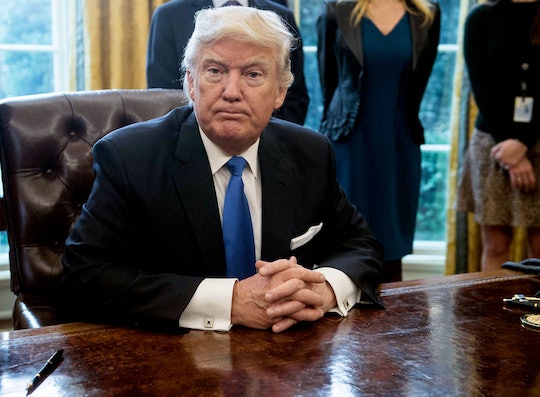 Trump May Ban Immigration From The Middle East

Tuesday was a big day for President Trump and his pen. He spent a significant chunk of his time signing executive orders that impeded women's reproductive rights and rolled back the clock on preventing climate change — and that was all before dinner. If recent reports are to be believed, it doesn't look like Trump's pen (or the world in general) will be getting much of a break on Wednesday either. There is the possibility that Trump may ban immigration from some Middle Eastern countries.

According to a report by Reuters, President Trump is expected to spend his fifth day in the Oval Office signing executive orders restricting immigration from Syria. Six other Middle Eastern and African countries are allegedly going to be included in the restricted immigration order, congressional aides and immigration experts told the news outlet. Citizens of Iraq, Iran, Libya, Somalia, Sudan, and Yemen will have visas blocked by Trump's executive order, reportedly until the State Department and Homeland Security have developed a more stringent vetting process for immigrants specifically from these countries. This order would be in direct opposition to former President Obama's pledge to increase the number of Syrian refugees allowed entry into the United States, as they fled an increasingly violent civil war.

Romper reached out to President Trump's team for comment and is awaiting a response.

When former President Obama made the decision to welcome an increased number of Syrian refugees to resettle safely in the United States, he was met with strong opposition. Alabama Sen. Jeff Sessions, one of Trump's top aides and his nominee for Attorney General, said at the time:

In addition to the very serious national security implications and the initial resettlement costs, admitting 110,000 refugees will result in an enormous long-term financial burden on the taxpayers.

During his 2016 presidential campaign, Trump referred specifically to the "tens of thousands" of Syrian refugees pouring into the country as a "Trojan horse," and claimed they would spawn future terrorist attacks in an effort to spread fear-mongering.

CNN reported that the Department of Homeland Security is allegedly considering the extreme option of "ending [the] Syrian refugee program and a suspension of Muslim majority country visas."

Trump and his Attorney General pick Sessions have both spoken of "extreme vetting" in the past, and Secretary of State Rex Tillerson has said that he wouldn't necessarily rule out the option of a Muslim registry, during his confirmation hearing earlier in January. Notably, he was still confirmed as Secretary of State.

Meanwhile, in case you've forgotten, in Syria and Iraq, and just about every country that Trump's reported order would affect, people are dying.