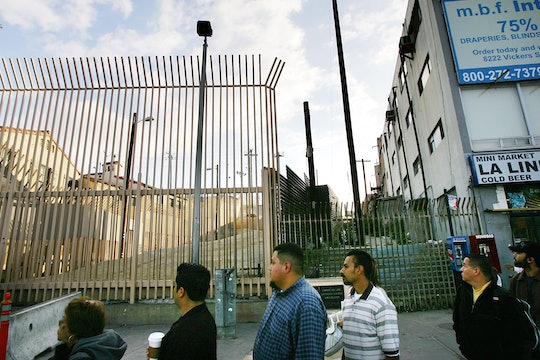 Will Trump Really Build A Wall? It Won't Be On Mexico's Dime

We've all had a little while to process our new reality. We've cried, we've fought, we've taken contemplative walks on the beach with our lazy dog in town and thought about the future (I have, at any rate). Now it's time to move on with the business of what we want that future to look like. Because that future includes Donald Trump as the president-elect, like it or lump it. Some are happy about this, some less so. But now is the time to start asking questions, like is Trump really going to build a wall between the United States and Mexico? He managed to get elected as the 45th President of the United States without ever having served in a political capacity on Tuesday, in part based on the promise of a wall. Will it happen?

If House Republicans have anything to say about it, perhaps a modified version of the wall might happen. According to Reuters, the lawmakers were already planning to discuss Trump's "big, beautiful wall" with the new president-elect on Wednesday, just one day after the election. While the House Republicans are on board with heightened border security, they are reportedly hoping to approach Trump with a less expensive version of his wall.

The House Republicans are reportedly hoping to convince the president-elect to consider double-layer fencing along the 2,000 mile border rather than constructing a brick wall. They are also hoping to utilize more federal agents as border security guards. They might have a difficult sell with Trump, who has been pledging not only to build a wall along the U.S.-Mexico border but also to have the Mexican government pay for it since his earliest days on the campaign trail. In his candidacy speech back in June 2015, Trump alluded to his years as a real estate magnate as proof positive that he would build an amazing wall:

Trump might well fulfill his promise to build a wall, but the President of Mexico continues to insist it won't be on their dime. After Trump was elected on Tuesday, the Mexican peso dropped 13 points, one of the sharpest drops the peso has seen in 22 years. Couple that with Trump's insistence to get rid of NAFTA (the North American Free Trade Agreement between Mexico, the U.S., and Canada), and Mexico could be on the road to some difficult times. President Pena Nieto said in a televised statement after Trump's victory speech that he hoped to seek "common ground" with Trump:

Dialogue to make agreements is still the best route for Mexico, and my government will seek opportunities that benefit both nations in this new phase of bilateral relations.

That being said, Mexico won't be paying for that wall, according to Foreign Minister Claudia Ruiz Massieu. And Congress might not be ready to pay for a wall either; U.S. Republican Rep. Michael McCall, the chairman of the House Homeland Security Committee, told Reuters that the wall was simply a "knee-jerk" reaction to immigration concerns.