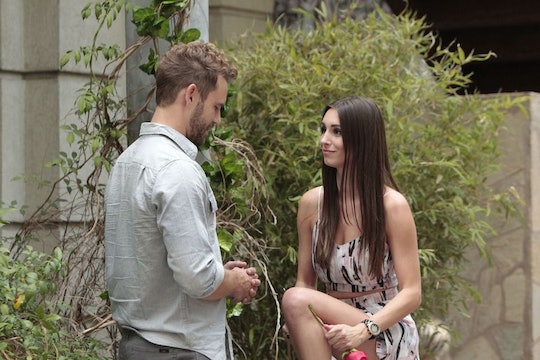 Vanessa May Take A Big Stand On 'The Bachelor'

Week 3 in The Bachelor mansion is already over, and the women are starting to get restless over Corinne's continued presence on the show. She's somehow made it this far, in spite of her relentless pursuit of sexual aggression (even though it clearly makes Nick uncomfortable sometimes), sleeping through a rose ceremony, and openly admitting that she still has a nanny at age 24. The other contestants have finally resorted to warning Nick about her in the hopes that he might expedite the process of eliminating Corinne. Raven, Taylor, and Vanessa all expressed concerns, but will Vanessa leave The Bachelor? She's the one who seems closest to leaving herself if Nick doesn't take action.

Vanessa seems to be the most confused about what to do since she had such a strong, authentic connection with Nick on their one-on-one date. Their chemistry was obvious and they even managed to navigate a miserably failed activity together when riding in a zero gravity plane made Vanessa so nauseous that she vomited on their first date. But later, when she spotted Nick and Corinne rolling around a bouncy castle making out at the house pool party, Vanessa felt totally thrown off.

"I couldn't have asked for a better one-on-one date with Nick, but I'm confused, because I've seen Nick and Corinne getting pretty physical and it's just hard to witness it," she explained in a cutaway interview. "So I'm pissed off. Honestly, I just don't want to be here right now."

Later, she explains to Nick what seeing them together brought up for her, saying:

I'm not judging Corinne. I'm judging your actions. It was enough for me to question: are you looking for a wife? Are you looking for someone to just f*ck around with? Because, at that point, I'd rather you just not give me a rose.

On the one hand, if watching Nick fool around with other women makes Vanessa super uncomfortable, then the show is probably not the right dating environment for her. But on the other hand, I can see how watching Nick pounce on his raw sexual chemistry with one of the other women so early on could make it seem like he's distracted from his alleged goal of finding a partner. Watching someone nonstop make out with somebody else after enjoying a legitimately emotionally-connected first date with slow-burn physical intimacy is understandably confounding.

Nick's connections with Corinne and Vanessa are super different, and my sense is that if Nick had another strong emotional connection similar to the one he shares with Vanessa, she wouldn't feel so threatened. But because it's a connection of a completely different variety, she feels as though perhaps they aren't looking for the same things.

Hopefully Vanessa stays on, if for no other reason than because she seems to bring out the best in Nick. She can always turn down his engagement later if she really believes (like most of Twitter) that she's too good for him.