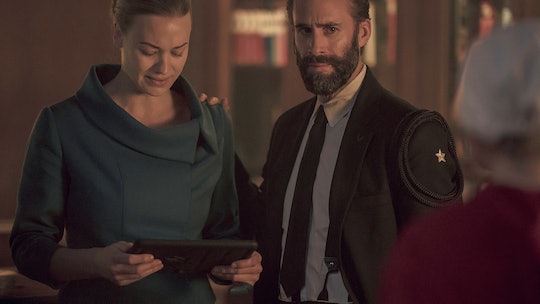 Real Talk: Fred Waterford & Serena Joy Should Never Ever, Ever Get Back Together

The dynamic between Commander Fred Waterford and Serena Joy on The Handmaid's Tale is complicated at best. Although they emerged as a united front in the series opener, the events leading up to the second season finale tore them apart and the Season 3 premiere showed just how much damage had been done. Following two catalytic conversations with her mother and June in "Useful," Serena plunged herself in the sea — seemingly reborn. But does this mean Waterford and Serena will get back together on The Handmaid's Tale or will Serena ride off into the sunset alone? As always, the answer isn't as straightforward as fans would like to think.

Prior to The Handmaid's Tale Season 3 premiere, cast and crew teased what's to come for Fred and Serena in upcoming episodes. Speaking with Entertainment Tonight, creator Bruce Miller and executive producer Warren Littlefield revealed that the Waterfords are still working on their relationship in The Handmaid's Tale.

"Expect the Waterfords’ marriage to heal as they come together over the loss of Nichole and begin to rebuild their place in society," the publication said.

Nonetheless, the revival of the Waterford duo could lead to its own repercussions. According to the publication, Serena will undergo a few changes after pulling herself out of the depression of giving away Nichole. However, this will lead her and Fred to "make an unexpected move that’ll lead to some unexpected consequences and encounters." Yikes.

Meanwhile, lead Elisabeth Moss spoke with Variety in regards to June's relationship with Serena in the third season. Despite a strong start at the tail end of Season 2 and the beginning of Season 3, Moss shared that “it’s not going to be as easy as June thought it was” to work with Serena.

That said, Moss confessed that her character's belief in Serena "was a mistake."

“There are people who will act for only their own interest," Moss said. "And that’s a discovery June has to make, and she makes it the hard way.”

Clearly, Fred and Serena make a decision that shakes up the third season of The Handmaid's Tale. And it's likely that the Hulu series is already building up to the big moment.

In Episode 4 of the third season, "God Bless the Child," June acts as a puppeteer to both Fred and Serena. June suggests that Fred give Serena a "real voice" to get back into her good graces. Then she reminds Serena of the work they had left unfinished from Season 2. “Wear the dress. Pull the strings," she says. However, June's plan could be derailed by Episode 5.

At the end of the fourth episode, Gilead officers uncovered footage of Luke and Nichole in Canada, but the Waterfords don't stop there. In the trailer for the fifth episode, titled "Unknown Caller," Fred and Serena tell June that they want to arrange a meeting with Nichole. Although June's advances in the third episode may still be in affect, Serena's rekindled partnership with Fred could potentially put everyone involved — including Nichole — in danger. But fans will just have to watch the new episode on Jun. 19 to know for sure.