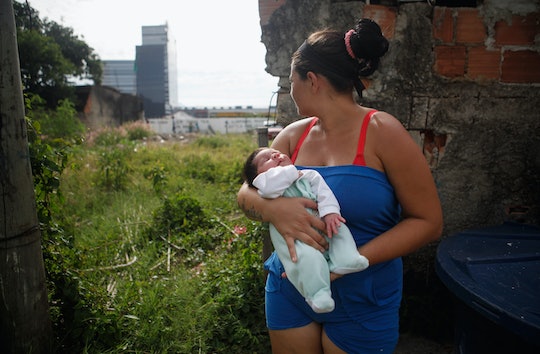 Will Zika Spread North Before Winter? Because Winter Is Coming

Summer is nearly over, if you can believe it. And with the end of summer comes... well, those of us northerners know what's coming next. We are all about to get duped by autumn colors and bonfires into feeling hopeful about the next few months. And then the snow will fall, and that's when we remember. Oh yes, winter. While some people might be excited to see the end of summer, especially with the Zika fear spreading, experts are looking into whether or not Zika will spread north before winter hits, or if it will die out slowly with the cooler months.

The bad news is, a new study has found that the Aedes Aegypti variety of mosquito responsible for the spread of the Zika virus, could potentially be passed down through the female of the species through their eggs. Which means that the end of the warm weather (when mosquitoes always flourish) will not necessarily mean the end of the spread of the virus. According to researcher Robert Tesh, the chair of the pathology department of the University of Texas Medical Branch:

While previous research indicated that the only way mosquitoes could spread the virus was through the bite of an infected adult Aedes mosquito, the study conducted by the UTMB found that an infected female mosquito passed the infection along to her offspring at a rate of one in 290, according to Bloomberg.

Tesh acknowledged that a vertical transmission rate (which refers to the transmission of the virus from one generation to the next) of one in 290 might be relatively low, and also conceded that the laboratory study might not translate into results in the real world. But he did feel the vertical transmission would probably take place. “This probably does occur in nature,” he said.

Tesh also brought up the issue of trying to kill the mosquito larvae that could spread the virus next summer. Spraying for mosquitoes, which frequently kills adults, does not work on eggs. And then there is their size, of course.

Scientists and researchers continue to search for a Zika vaccination. The Zika virus can be passed by a pregnant woman to her fetus, and can cause congenital neurological disorders like microcephaly. The virus has been spreading throughout the southern hemisphere and continues to move north to the southern United States, with cases reported in Florida.