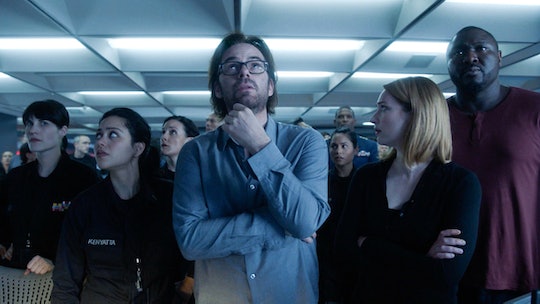 With the onslaught of new shows that come in and out of networks each season, not many of them are ever truly safe. And with CBS' Zoo, which has seen staggering ratings and viewership over the past season, the future may be unclear for it as well. And after Thursday's season finale airs, fans are definitely going to be asking, will Zoo return for Season 4? The show's future is uncertain for the sci-fi thriller series and the ratings aren't doing it any favors.

Zoo has maintained a 0.51 rating in the 18-49 demographic and 2.64 million viewers for Season 3, which would make it down by 31 percent and down by 41 percent since Season 2. To put it in perspective, Life in Pieces, another relatively new CBS show, averaged more than 6 million viewers for its second season, so if Zoo’s viewership is any indication of its chances for a Season 4, things aren’t looking too good.

This isn't the first time the show, based on James Patterson’s novel, has been in danger though. Season 2 of Zoo averaged 4.453 million viewers in the 18-49 demographic, which was down significantly from the previous season, just as Season 3 has been, and the show can only last so long with steadily decreasing viewers.

Even then though, Zoo was renewed for Season 3 ahead of it's Season 2 finale, but as of right now, there has been no official announcement for Season 4 of Zoo. And the better question is, if this is the end, will the Season 3 finale treat it that way to at least give viewers the kind of closure needed with a show they've no doubt followed blindly for three seasons so far?

The synopsis for the Season 3 finale of Zoo states the following: "The team races to stop the hybrids from breaching the barrier wall by shutting down the last beacon that draws them in." If there was no doubt that there's going to be a Season 4, then things could be left off on an exciting cliffhanger to leave fans wanting more, but since this could very well double as the season finale and series finale, there will probably be some closure or at least answers to give viewers something to hold onto in case Zoo doesn’t return to CBS next summer.

Honestly, though, Zoo got something of a bum deal when it was chosen to be a summer show for CBS, even though it was given the cushy time slot after Big Brother on Thursday nights. Summer shows in general tend to not do as well as those in the typical fall premiere season because, well, it’s summer. People are less likely to want to stay in and watch TV when the sun doesn’t even go down until 9 p.m. The fact that it’s managed to last this long does say something about what Zoo has to offer, but summer shows aren’t always long for this world.

Take CBS’ rendition of Under the Dome, based another author, Stephen King’s novel. After a strong first season, things got progressively stranger and veered so off course from the book material that Season 3 was its final season. That’s not to say that Zoo hasn’t done the book justice, but sometimes there’s only so much you can do when a TV series is based on a book. For now, fans can enjoy the Season 3 finale of Zoo and hope that, in case it isn’t renewed for a fourth, they get a proper goodbye. And maybe, just maybe, CBS will find a place for Zoo in Summer 2018.