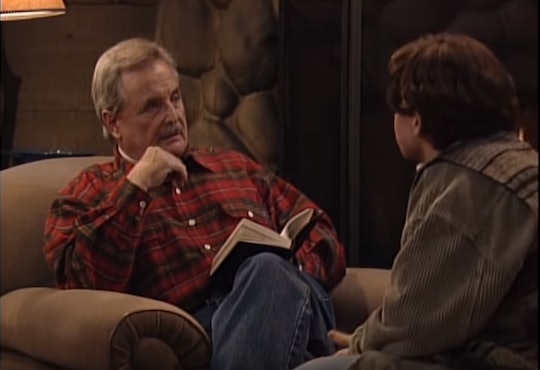 Mr. Feeny Just Stopped A Home Invasion At The Age Of 91

All '90s kids know about Mr. Feeny, the tough-but-fair teacher from Boy Meets World. In fact, I think it's safe to say that his well-modulated voice imparting wisdom can still be heard in the backs of millions of people's minds to this day as they make life decisions. And why wouldn't it? Mr. Feeny was the best... and it appears as though he remains as amazing at the ripe old age of 91. The Boy Meets World actor thwarted a home invasion recently, because everyone knows how Mr. Feeny feels about people coming over his fence, don't they?

Romper reached out to the Los Angeles Police Department and a rep for William Daniels, but hadn't heard back at the time of publication.

TMZ reported on Tuesday that Daniels and his wife Bonnie Bartlett, were relaxing at their San Fernando Valley home on Saturday when an intruder attempted to gain entry. The media outlet noted that a suspect tried to kick the back door of Daniels' home in around 9:20 that evening, which would have been totally terrifying to most people. But as everyone should know by now, the actor who played Mr. Feeny is not most people.

Now before you go picturing a 91-year-old man springing into some sort of Bruce Lee-type action hero moves, let's all calm down. Daniels did the most reasonable and Feeny-like thing he could do, as far as I'm concerned. He reportedly turned the lights on and this was enough to scare off the intruder, as his rep told People in a statement:

Someone tried to break in to the home of Mr. and Mrs. William Daniels on Saturday evening. Luckily, Mr. Daniels was able to frighten away the person and the LAPD quickly responded. They are both well. Mr. Daniels thanks all his fans for their concern.

Obviously, Feeny fans were elated to know their hero still had it in him to foil a potential home invasion. Because Feeny has never been about suffering nonsense from anyone.

Even Daniels' former Boy Meets World co-star Will Friedle, who played Eric Matthews, was sure to congratulate his former TV teacher on staying cool in a tough situation.

The LAPD reported that there is no reason to suspect that Daniels and Bartlett (who played Mr. Feeny's love interest back in the day, in case you needed your daily dose of adorable) were targeted for a home invasion, as noted by Us Weekly. There have apparently been a number of celebrity home invasions in the area recently, as TMZ reported, including the homes of Rihanna, Matt Damon, Viola Davis, and LeBron James. Which has me picturing all of these celebrities visiting a real life version of Mr. Feeny's fence for a little wisdom and guidance, just like on Boy Meets World.

It's good to know that William Daniels, who is so inexorably tied with the beloved Mr. Feeny in fans' minds, will live to see another day. Because the world would feel like a dimmer place without him.