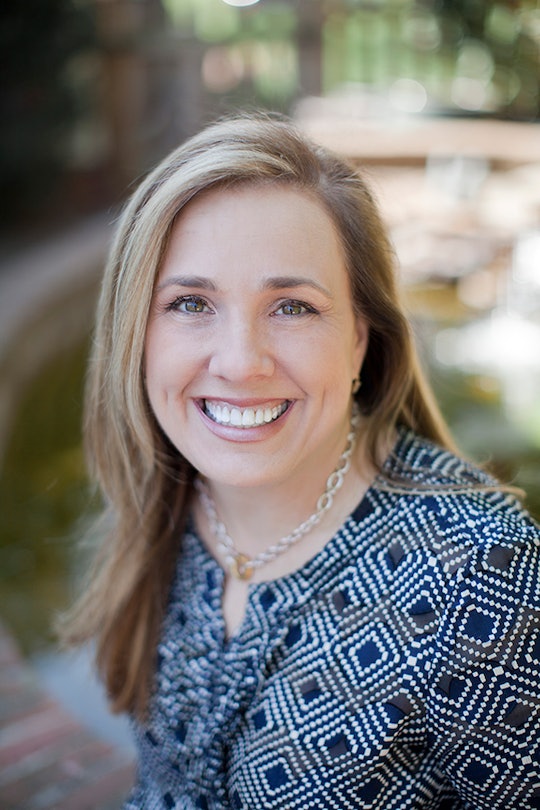 There's Now A Fake Tattoo To Keep Your Kid From Getting Lost, & Guys, It Works

A crowded waterpark, a busy beach, a supermarket with a hundred aisles — wherever you are, the thought of being separated from a very young child is every parent's nightmare. But necessity is the mother of invention, so Michele Welsh, a mother of three herself, developed SafetyTat, a waterproof, temporary tattoo customized with your mobile phone number, to ease anxiety for parents and kids alike. I, for one, won't take my daughter to Disneyland without one.

Welsh's idea sprang from a weekend at the amusement park. The Baltimore mom had three children under 5, and when she saw the crowds, she balked. But instead of packing up and going home, she wrote her cell number on her children's arms with a ball point pen, instructing them to show the number to an adult if they got lost. It wasn't perfect — she had to keep rewriting the numbers as they smeared — but it eased her mind, and soon, other parents at the park were emulating her. Welsh had stumbled on a clever, simple solution to a sticky problem: how to keep your children safe, while still letting them spread their wings.

"So many people have stories about being separated from their children," Welsh tells Romper. "Even those kids who have memorized their parent's mobile number, when they're upset, so few of them can actually recall it." In need of a long-lasting solution, Welsh called upon her background in graphic design to craft two different products. The SafetyTat Child Id Tattoo is much like the water-appliqué prizes you find in a Cracker Jack's box (except durable and waterproof). The translucent tattoo comes pre-printed with a customer's phone number. According to Welsh, the SafetyTat will last through DEET, showers, and pool parties for one to three days, making it summer's safest accessory.

SafetyTat also sells the Quick-Stick Write On!, an opaque sticker that parents can pen themselves. These last for up to two weeks. All SafetyTat tattoos and stickers come with fun, colorful characters — a flower, a rocket ship, a charming butterfly — so kids can choose their favorites.

SafetyTat, which hit the market in 2009, is now a thriving business, utilized by parents around the globe in resourceful and surprising ways. These days, Welsh works a lot with the autism community. "Kids with autism are more likely to run or not stay with caregivers, so the autism community has embraced us, with open arms, as a helpful parenting tool," she explains. SafetyTats can also be customized for children with severe allergies, Celiac disease, diabetes, or other medical conditions:

"We call our tattoos the voice of the parent when the parents not around. It helps the child communicate. And I know that some kids. . . don't want to explain their condition over and over again. [SafetyTat] does the talking for them."

Starting a business is never easy, and amazingly, SafetyTat was Welsh's first time at bat. "Logistics and sales forecasting and ordering. . . all that stuff was much harder than I thought." Then there was the legal landscape — trademarks, copyrights, and a patent. At first, it was nearly as overwhelming as her weekend at the amusement park, but Welsh stepped up. "I call it my mini MBA program," she jokes. "So many things are daily lessons, from the Excel spreadsheets in the beginning to just figuring out what makes a business tick."

Welsh's growth mindset — her expectation that she'll learn from her mistakes, and not be crushed by them — is clearly an aspect of her success. Her sense of humor is another. (When she makes expensive missteps in her business, she laughingly calls it her "tuition.") Now SafetyTat has gone international, and Welsh receives orders from Iceland, Hawaii, Singapore, and China. "It's really cool to think we're making an impact that's so big and broad."

So what's Welsh's advice for moms hoping to start businesses, switch careers, or go back to work? A five-step process for evaluating decisions, called Consulting Our Five. First, speak with your optimist — the positive, encouraging person in your life. Second, your pessimist — the person on the lookout for pitfalls. Third, your lawyer — am I allowed to do what I'm proposing? Fourth, your accountant — can I afford to do what I'm proposing? And lastly, Welsh recommends speaking to "someone with whom you share history." They can tell you if your goals align with what you've expressed in the past.

With the exception of the lawyer and the accountant, you can seek out these supportive voices whenever you have an important life decision to make, and Welsh encourages moms to follow their passions — not least because parents have such a powerful way of looking at the world. Every day, caregivers are solving problems and creatively using the resources at hand. (Remember that time the high chair broke? You fixed it. No problem.) "As a mom, it's amazing how much you can pick up with your feet," laughs Welsh. "But beyond that, and in a more sophisticated way, you just start thinking, how can I do all these tasks efficiently?"

Welsh's problem-solving led to a business that helps kids stay safe — the inexpensive "Tat That Brings Kids Back." A simple idea, born of necessity, is now making a real difference in the lives of parents and children. She receives notes from parents after they've been successfully reunited with their kids because of their SafetyTat. "They say thank you. Because of your product, my child didn't panic when they were separated. They knew exactly what to do."

The founder of SafetyTat confirms what I've always believed — being a parent gives you superpowers. So go ahead and use them.