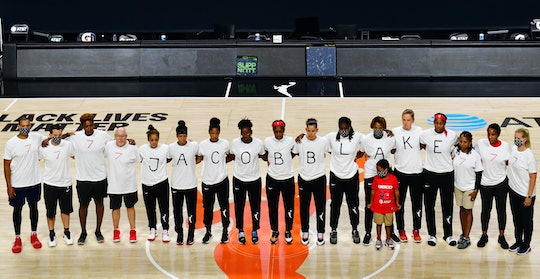 To honor Jacob Blake — a Black father who's reportedly been left paralyzed from the waist down after being shot in the back by police in Kenosha, Wisconsin — WNBA players wore t-shirts with seven bullet holes on their backs and made a powerful statement.

On Wednesday evening, Washington Mystics basketball players stepped out together in unison wearing white t-shirts with Blake's name spelled out on the front and seven bloody bullet holes on the back representing the amount of times police opened fire against the 29-year-old as he tried to enter his vehicle where his three young sons were waiting for him. A lawyer for Blake's family told reporters on Wednesday that he is not expected to walk again as the bullets severed his spinal chord.

No charges have been laid against any police officers in relation to the case, although the Wisconsin Department of Justice is investigating and the officer who shot Blake has been identified, according to CNN.

The Washington Mystics were scheduled to play against the Atlanta Dream on Wednesday, but all three games scheduled for the WNBA that night were canceled as players joined other professional athletes in a strike to protest police brutality, including the NBA and MLB, according to The Washington Post.

The Washington Mystics, however, were the only team to walk onto the court wearing t-shirts with simulated bloody bullet holes on their backs. In a stunning photo, the players took a knee while displaying the bullet holes on the back of their shirts.

The move was supported by WNBA commissioner Cathy Engelbert who told HuffPost, "We absolutely support them." As did players from the Atlanta Dream, who stood in solidarity with their fellow athletes by refusing to play. Dreams' center Elizabeth Williams explained in a statement that "we stand in solidarity with our brothers in the NBA, and will continue this conversation with our brothers and sisters across all leagues and look to take collective action."

Washington Mystics player Ariel Atkins spoke on behalf of her teammates about their decision to postpone Wednesday night's game and shared a powerful message. "We need to understand that these moments are so much more bigger than us, and I really appreciate my team, for not only having my back, but for saying what they feel," she said, according to The Washington City Paper. "It's hard to say that type of stuff in these moments. It's hard to be vulnerable in these moments. But I think if we do this unified as a league, it looks different."

"Because this league is close to, if not over, 80% Black women," Atkins' statement continued. "We have cousins, we have brothers, we have sisters, mothers, everyone — we matter. And I think that's important. I think people should know that. And I'm tired of telling people that. I know I matter. We know we matter. I'm tired of telling people that. If you don't know that, if you don't think that, then you need to recheck it. If you have a problem with us saying 'Black lives matter,' you need to check your privilege."

Optics make a difference. Being a steadfast ally makes a difference. And the Washington Mystics are making a difference, wearing shirts peppered with bullet holes in the back. They make it difficult to forget Jacob Blake's pain, and that's exactly the point.