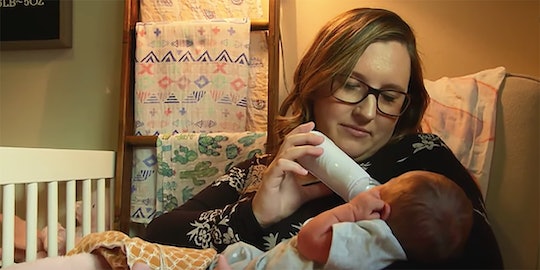 You may have read about groundbreaking uterine transplants taking place within the last few years, giving hope to people who thought bearing their own child would be impossible. That's why this woman who gave birth after a uterus transplant deserves a round of applause, as she's now bravely opening up about a "taboo subject" and bringing attention to less discussed fertility issues.

Kayla Edwards, born with a congenital condition that left her without a viable uterus, gave birth to Indy Pearl Edwards on Sept. 10, as USA Today reported. Edwards, 28, was one of 20 uterine transplant patients Texas' Baylor University Medical Center in Dallas before her daughter was born, making the 6 pound, 5 ounce blessing the fourth baby born at the hospital through the game-changing procedure, USA Today explained.

And while the other success stories belong to those who kept their stories private, Edwards and her husband, Lance, feel their strength lies in being open about their trials. "Hearing other people’s stories when I was first diagnosed [with Mayer-Rokitansky-Küster-Hauser, a congenital syndrome] gave me a lot of hope, and I just wanted to be that person now," Edwards said, according to TIME.

Edwards first found out about her congenital uterine condition as teen, meaning she not be able to physically bear children. She later went on to marry Lance, a friend from elementary school in Vancouver, Canada.

After getting married in 2013, the pair took hope from the world's first uterine transplant, and ultimately decided to leave their home and jobs behind to take a chance on the Baylor program, according to the Daily Mail.

"I’ve been open since the day we left Vancouver," Edwards told Time of her journey to having a child, which has included losing her initial uterus donor before finding another and having a successful transplant, followed by multiple rounds of IVF since the couple moved to Texas in 2016.

To sum up the procedure, women in the trial spend five hours on the operating table to receive a uterus and then must take specialized drugs so the body does not reject the organ. Then, doctors wait to see whether a woman achieves menstruation. If the transplant is successful, women are then candidates for in vitro fertilization (IVF)," USA Today added.

"I just hope our story gives people inspiration and hope," the ecstatic new mom told TIME. "It is a taboo subject, and I want people to know there’s tons of support out there and people going through things with them. That has always has empowered me to share my story—so it could help somebody else."

And while Edwards' pregnancy went smoothly once the couple got there, husband Lance told USA Today it was understandably hard to finally relax. "The first four months, every day, she was in constant worry. It was hard for her to get excited about it," Lance noted.

Getting through all the medical hoops was more than worth it once the Edwardses got to see their baby, who was born with 30 doctors and specialists in the room. "Cheering and crying with us," Edwards described, adding that one day she would like to meet the uterine donor who made her miracle possible.

Doesn't this amazing story just make you tear up? And it's noteworthy that Edwards was willing to go public with her story, which means someone else out there might now find the hope they need in their own fertility and medical struggles. That's why this new mom is a superhero to me.