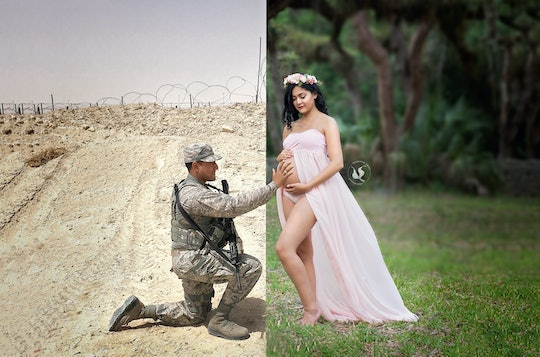 Just because someone in your family is deployed for military service doesn't mean that life stops. Birthdays, holidays, even boring Wednesday nights happen all the same. Which is why this woman's photoshoot with her deployed husband is quite possibly the nicest thing you'll see all week, especially if someone you love has been or is deployed.

Veronica and Brandon Phillips of Florida get it. They're expecting their first child together. One small catch? Veronica is home, preparing for the new baby, and Brandon is stationed overseas with the Air Force, likely preparing for the infant in his own way. But they didn't want the ocean and military duty to get in the way of a good maternity picture.

Luckily, the creativity and supreme Photoshop skills of Miami-based photographer Jennifer McMahon came to their rescue. And McMahon wasn't going to have some corny maternity Photoshop "thing" happen on her watch. She told The Huffington Post:

I had seen many photos where people were Photoshopped in, and I have Photoshopped siblings together before to look like one seamless photo. After playing around with several edits for a few days and many hours of editing, I posted the one I thought told the best story and would evoke emotion in all who saw it.

Whatever she did tech-wise, it totally worked. The image captures the idea of both parents being apart, but totally connected by their child. Yea, go ahead, grab the tissues.

McMahon definitely captured a perfect, if slightly unorthodox, maternity shoot. It's a little sad, but also really heartwarming in a nice way, which is exactly what McMahon wanted when she took on the project:

It is very common it seems for military husbands to miss pregnancies or births of their children. It broke my heart when Veronica told me her story. I couldn’t imagine. And to think it’s a regular occurrence. This is what it means to serve our country.

She's right. Military moms endure an entirely different pregnancy — and postpartum life — than some other moms. It's as unique an experience as anyone else's. Which is why this great Photoshop job and coordination between the parents and photographer (not always easy in any circumstance) to get a simple maternity photo across continents and secure email lines seems like a superhero act. Because the way that military parents keep their heads up, make compromises, and find ways to keep their families going forward no matter what is pretty superhuman.

For his part, Brandon told McMahon that he was "happy [his] wife gives military women a voice through pictures."

To see more of McMahon's photography, check out her official website.